Who was Rosemarie Magdalena Albach-Retty? 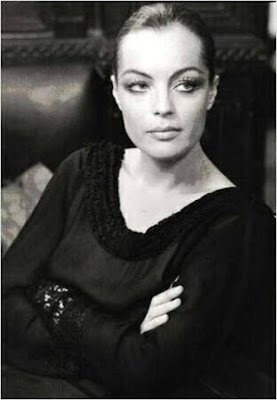 Rosemarie Magdalena Albach-Retty was born on September 23, 1938 in Vienna into an old family of artistes and actors. Her paternal grandmother Rosa Albach-Retty was a stage actress and an icon of her time, her father, handsome Wolf Albach-Retty, would be well nigh forgotten now weren't it for his exceptional daughter. Her mother was Magda Schneider, another actress and a star in many of the partly notable, partly notorious, films during the Thousand Years between 1933 - 1945.

After her divorce from Albach-Retty in 1945, Magda Schneider took care of her daughter. Four years, from 1949 to 1953, Romy was educated in an exclusive and very much Catholic boarding school under the supervision of the "Englische Fräulein" (English Sisters). Romy had made her film debut already in 1953, aged 15, with "Wenn der weiße Flieder wieder blüht" and taken her mother's name as screen name. Magda supervised her career, often appearing alongside her daughter. 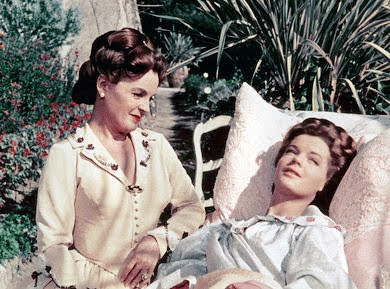 Romy and Magda in "Sissi".

Young Romy's career was also overseen by her then stepfather Hans-Herbert Blatzheim whom Magda had married in 1953, a well-known and wealthy restaurateur, who, so Romy Schneider later indicated, had an unhealthy interest in her. When her first husband Harry Meyen sorted out her finances, it turned out that Blatzheim owed her SF 1,251418.15, part of which she got back after her stepfather's death.

In the film "Mädchenjahre einer Königin" (Ernst Marischka, 1954) about the girl- and early womanhood of Queen Victoria of England, Romy Schneider portrayed for the first time a royal. Her break­through to stardom, however, came with her interpretation of the young Princess Elisabeth in Bavaria -- later Empress Elisabeth of Austria -- in the romantic biopic "Sissi" (1955) and its two sequels 1956 and 1957. 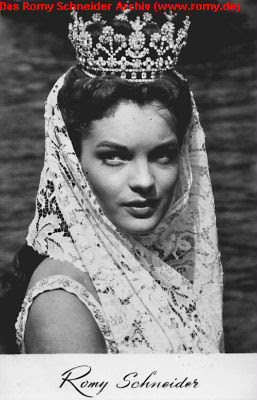 Sickened by the syrupy image the "Sissi" genre had bestowed upon her, Schneider leapt at the chance of starring in the sombre "Christine" (1958), a remake of Max Ophüls' 1933 film "Liebelei" based upon a play by Arthur Schnitzler. Interestingly, in the original version of the film, Romy's mother, the rather homely Magda, had proved, as far as I know for the one and only time, that she could act. It was during the filming of "Christine" that Romy fell in love with French actor "bad guy" Alain Delon, who co-starred in the movie. Schneider became engaged to him in 1959, and the couple moved, to the chagrin of Romy's German audience, to Paris.

This was the start of her international film career, her escape from "football-mom" Magda Schneider and "Daddy" (as he was known) Blatzheim and the "sweet young thang" image that had become the only way her Germano-Austrian audience was willing to accept her. She had no easy start abroad, though. She once said something to the effect that to the Germans she was a traitor to the fatherland and to the French somebody who climbs mountains in ethnic costume and brogues. 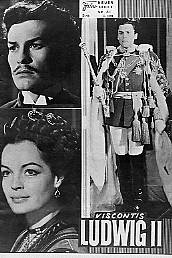 Her ensuing career, however, took her far and even to Hollywood ("Good Neighbor Sam", a 1964 comedy with Jack Lemmon, and the 1965 movie "What's New, Pussycat" with Woody Allen). Mainly, however, she stayed in France, working with film directors such as Orson Welles ("Le Procès" of 1963, based upon Franz Kafka's "The Trial") and Luchino Visconti ("Ludwig", a 1972 film about the life of King Ludwig II of Bavaria in which she played a much maturer Elisabeth of Austria again). "Sissi sticks to me just like oatmeal", she once said.

Schneider's private life was a chain of failed relationships. Dumped by Delon in 1963, she married (1966) and divorced (1975) Harry Meyen, a renowned German stage actor, who committed suicide in 1979. In 1966 their son, David-Christopher had been born. 1975 she married Daniel Biasini, her private secretary. They separated in 1981. 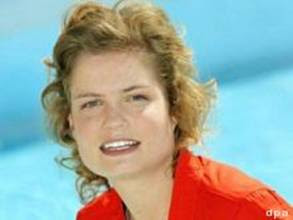 Her daughter by this marriage, Sarah Magdalena Biasini (b. July 14, 1977), although blonde, stunningly resembles Romy, and even shows a tiny fraction of her mother's charme.

Even after the breakup of their relationship, Schneider continued starring in films with Delon ("La Piscine", 1969). Of her other films, the haunting, macabre (and, dare I say it: degenerate) "Le trio infernal" (1974) and "Les choses de la vie" (1969), both with Michel Piccoli, are of particular importance. I loved her in "Max et les ferrailleurs" (France 1971) another film with her favourite co-star Michel Piccoli who, as a policeman and ever the seducer, traps her, a hooker, into inadvertently betraying her petty criminal cronies. 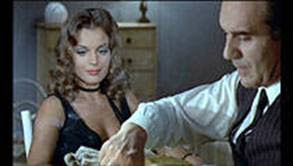 A street walker with a heart of gold and an air of innocence, something only Romy was able to get across. 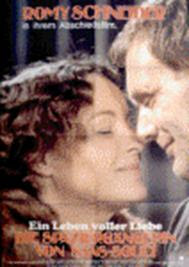 A heavy smoker all her life, Schneider also took to drinking in her later years, especially after the death of her son David. David was found impaled on a fence at his step­father's parents' house which he had attempted to climb on July 5, 1981. After the removal of a kidney, Romy was not supposed to drink alcohol anymore. However, she did. Less than a year after the death of David, she was found dead in her flat in Paris, aged only 43. It turned out that she had taken a strong combination of alcohol and sleeping pills that night, but no post-mortem was performed and she was officially declared as having died of cardiac arrest. She was so overindebted, that nobody accepted her inheritance.

Romy was talented, beautiful and weak and gullible and vulnerable. Compared to her, even legendary Hollywood divas appear one-dimensional, wooden and cold, like Grace Kelly, or blowzy and common, like Liz Taylor. And as to her own generation -- WAS there really ever anybody worth comparing? What French actress could ever even remotely reach her?

But what fascinates me most about her is that even now, after almost fifty years have past since its premiere and having seen it for the nth time, one still longs to see the image of that beautiful child who, in spite of all the historical inaccuracy and saccharine was never, never kitschy herself.

As Mattussek and Beier put it in their recent DER SPIEGEL article: "That was Romy Schneider for the German cinema: a golden cloud that faded away. But every time one of her films is shown, the cloud builds anew. And puffs out again." 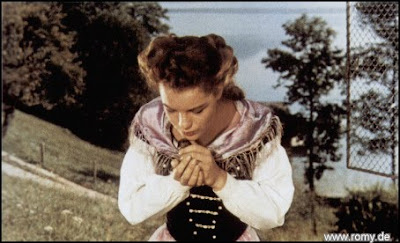 Hand me over the "Sissi" trilogy on DVD and I will watch it on any rainy Sunday afternoon again (and again) without becoming bored! And yes, all you "good taste" conscious Neuer Deutscher Film or Nouvelle Vague afficionados, BITE ME!

Rosemarie Magdalena Albach-Retty died 25 years ago today. Romy Schneider, forever young and beautiful, will live on for a long time. For more information and pictures go to "Das Romy Schneider Archiv".
By The_Editrix At 09:15

I to respect and admire Romy Schneider. I was shocked to hear that her tomb was ransacked by thieves at one point. Romy was beautiful; I love her eyes, and her accented voice; they were the vehicles of her character and charm. I only wish she had stayed in the USA. Her career was just taking off when in 1964 she packed up and headed back to Europe-Why? That yutz Alan Delon that's why. He broke up with her because she was becoming successful in Hollywood and he was not. As a result, he didn't have the courage to tell Romy face to face, he left her note when he fled to Mexico. With her emotions raw, Romy wasn't thinking right, so she packed up for France thus effectively shooting her Hollywood career in the foot. Her later movies in France were O.K, but not colorful. The french films tended to be dreary and dark with dreary music scores and lack luster plot lines. These movies were depressing and beneath Romy Schneiders talent and screen presense. She belonged in Hollywood not Paris. Her first film in US was Good Neighbor Sam. It was fantastic and Romy stole the movie; all eyes are drawn to her. What's New Pussycat was another light hearted movie where Romy Schneider became the movie. These movies are fun and colorful and full of life; Romy was full of life at one time. America really lost out when Romy left Hollywood. Romy became a tragic hurting figure long before her son's death; you could see it in her eyes. Those who says they are fans and love Romy Schneider should pray for her. I pray that her soul is at peace with her Maker. I pray that she is reunited with her son, David, and that both are in the loving arms of Christ in heaven. So next time you are planning to watch Sissi on some rainy day or quiet Sunday afternoon, before you put the movie in, stop for a moment and say a prayer for her; I promise, you'll enjoy the movie more knowing that you are supporting Romy's soul in eternity. It also brings you a little closer to her and God. Thanks for reading.

There is something about Delon that bothers me. During the dates you give for her relationship with him, Delon co-starred (the lead was Burt Lancaster) in Il Gattopardo by Luchino Visconti - the greatest Italian movie ever made and as close to a national epic as anything in modern Italian arts. Visconti was a great genius, an aristocrat from one of the bluest-blooded lineages in Europe (his forefathers had ruled Milan for three centuries), a Communist - and a predatory homosexual who selected his leading men according to their, shall we say, willingness. The great Italian actor Nino Manfredi has testified that he could never work with Visconti because he was not disposed to grant certain favours to his own sex. It is hard to believe that the beautiful Delon would not have been subjected to his attentions. In short: did Delon betray Romy, not with another woman, but with an older man?

Although Delon is, in the coventional way, a goodlooking man, I see something in his face I find deeply disturbing and highly repulsive, something rotten and debauched. Maybe it is what you are talking about. And I am not talking about his assumed homo- or bisexuality per se. I know homo- or bisexual men I find likeable as people and attractive as men. I don't know what it is. I reacted this way the first time I became aware of Delon's existence as a young girl and I do now as an ageing woman.

What are you talking about? It is a well-known fact that Alain Delon had quite a reputation when he was young and did not try to conceal his bisexual experiences. In 60s it was a kind social norm for actors. Of course Romy knew about that and did her best to remain at her fiancée side regardless. After all, she was a great actress and working with Visconti was important to her. He introduced her to Coco Chanel. We do owe him the image of Romy we love now.

Yes. I tried to find any evidence that he was really in love with Romy and it looks like it was only true in the beginning. But he was really young too, 23 or 24 or so when they have met. I have heard Annie Girardault referred to them as "wrong for each other". Who was really the one to blame was the future "Madame Delon", or Nathalie. She did have a heart to announce quite recently that if her "affair" did upset Romy, it wasn't her "problem". If not for her, Alain Delon and Romy Schneider would have probably stayed together.

Thank you, Pembroke, and everyboy else here, for your insightful comments.