Commenter Bruce Church made me aware of the fact that the bloody (as in "gory" AND as in "damned") matam ritual is performed in London on a regular basis. (Thank you, Bruce!):

...it just came out that in December 2009 the bloody Shura Shia self-flagellation ritual was held in east London. 800 men participated, and it's going to happen again in Dec 2010. The police can't stop it.

The report by the Express is traded as a revelation of sorts. 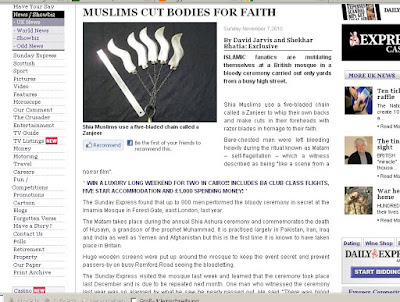 Shia Muslims use a five-bladed chain called a Zanjeer to whip their own backs and make cuts in their foreheads with razor blades in homage to their faith.

Bare-chested men were left bleeding heavily during the ritual known as Matam – self-flagellation – which a witness described as being “like a scene from a horror film”.

The Sunday Express found that up to 800 men performed the bloody ceremony in secret at the Imamia Mosque in Forest Gate, east London, last year.

The Matam takes place during the annual Shia Ashura ceremony and commemorates the death of Husayn, a grandson of the prophet Muhammad. It is practised largely in Pakistan, Iran, Iraq and India as well as Yemen and Afghanistan but this is the first time it is known to have taken place in Britain.

Huge wooden screens were put up around the mosque to keep the event secret and prevent passers-by on busy Romford Road seeing the bloodletting.

The Sunday Express visited the mosque last week and learned that the ceremony took place last December and is due to be repeated next month. One man who witnessed the ceremony last year was so alarmed by what he saw he nearly passed out. He said: “There was blood everywhere. There were pools of blood on the ground and my clothes were splattered with blood. It was very scary.

“I was told it was part of a religious ceremony but the anti-western sentiment was clear. If the public had seen what was going on they would have reported it to the police. It was like a scene from a horror film.”

A devout member of the mosque who attended last year’s ceremony said he was proud of the thick Matam scars across his back and showed them to our photographer. Ameer Hamza, 21, a student from Forest Gate said: “I started doing it when I was a kid. ”

Scotland Yard said it was aware of the annual Ashura event at the mosque but had no knowledge of the bloodletting which it said it had no power to ban.

A spokesman said: “If it is on private property and no offence is being committed this is not a matter for the police. The Ashura is an annual community event which has taken place in Newham for many years.”

Newham Council said it had no knowledge of the Matam taking place and the Ministry of Justice said self-flagellation was not an offence.

It isn't really. A brief Google search rendered several reports from previous years, for example 2009 in Birmingham, or 2005 in London. (Kudos to the New Statesman!) It's just that nobody gives a damn.

Maybe the English are well advised to introduce more games that are sensitive towards the ever-growing ethnic diversity at local village fêtes, such as "stick the tail on the Muslim" or "guess the amount of blood those guys in the flaggelation contest lost", because guessing the weight of a pig should be really a no-no in these culturally aware days and times.

Here are some pictures of such, well, community events taken from various sources in the Internet, just for your edification. 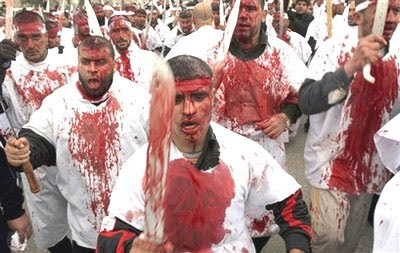 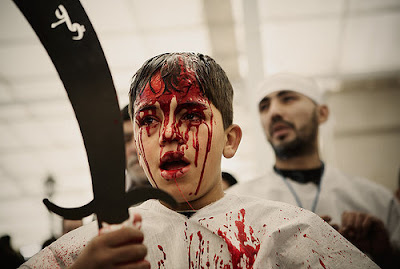 Thoroughly wholesome entertainment! Bring your family!
By The_Editrix At 10:35

There might be serious health issues
raised by this practice.

Certainly. But that's maybe not quite beside the point, but a side-issue.

This Time article is big news in the US this week.

I heard on the radio that the UK is similar to the US when it comes to marriage. It's went way downhill since the 1960s. Now half the country is involved in serial marriages, and kids see cohabiting adults come into their lives as though the adults are on a conveyor belt:


Most of those unwed mothers said their chances of marrying the baby's father were 50% or greater, but after five years, only 16% of them had done so and only about 20% of the couples were still cohabiting. This didn't mean that the children didn't live with a man, however, since about a quarter of their moms were now living with or married to a new partner. That doesn't always work out as well as it seems to in Modern Family or Phineas & Ferb. Offspring from earlier relationships put pressure on new ones. For the least wealthy children, Mom's new boyfriend often means their biological father is less likely to visit and less likely to support their mother. Many stepparents are wonderful and committed, but a series of live-in lovers is not at all the same thing. "About 21% of American children will see at least two live-in partners of their mothers by the time they're 15," says Cherlin. "And an additional 8% will see three or more." (See 10 TV moms June Cleaver would hate.)

Would marriage really stop the conveyor belt of parent figures?

Wow, with all that blood letting and cut flesh, what if somebody had AIDS or some other communicable disease, and it spread amongst them?

I've seen very brief clips of this practice on television, but there has never been a real intense, hard look at it. It would be a good subject for a documentary.

I don't think they'd win very many converts over here doing that. No wonder they try to do it in secret.