CHICAGO -- Is it OK for doctors and parents to tell children and teens they're fat? That seems to be at the heart of a debate over whether to replace the fuzzy language favored by the U.S. government with the painful truth _ telling kids if they're obese or overweight.

Labeling a child obese might "run the risk of making them angry, making the family angry," but it addresses a serious issue head-on, said Dr. Reginald Washington, a Denver pediatrician and co-chair of an American Academy of Pediatrics obesity task force.

"If that same person came into your office and had cancer, or was anemic, or had an ear infection, would we be having the same conversation? There are a thousand reasons why this obesity epidemic is so out of control, and one of them is no one wants to talk about it."

The diplomatic approach adopted by the federal Centers for Disease Control and Prevention and used by many doctors avoids the word "obese" because of the stigma. The CDC also calls overweight kids "at risk of overweight."

Those favoring a change say the current terms encourage denial of a problem affecting increasing numbers of U.S. youngsters.

Under a proposal studied by a committee of the American Medical Association, the CDC and others, fat children would get the same labels as adults _ overweight or obese. 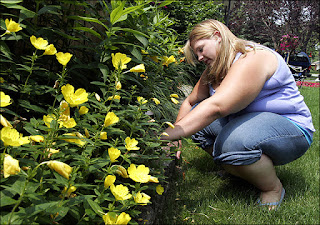 Trisha Leu, 17, who has lost 60 pounds since undergoing gastric band surgery in March, weeds the garden in the front yard of her Wheeling, Ill., home, Wednesday, June 28, 2006. The American Medical Association is considering a proposal to label children in the highest weight category as "obese" instead of the current term, "overweight." Trisha dislikes the term obese because she thinks "it sounds mean. It doesn't sound good." (AP Photo/Stacie Freudenberg)

The change "would certainly make sense. It would bring the U.S. in line with the rest of the world," said Tim Cole, a professor of medical statistics at the University College London's Institute of Child Health.

The existing categories are convoluted and "rather ironic, since the U.S. leads the world in terms of obesity," Cole said. "There must be an element of political correctness."

The debate illustrates just how touchy the nation is about its weight problem.

The Wheeling, Ill., teen has lost 60 pounds since March as part of an adolescent obesity surgery study at the University of Illinois at Chicago.

Well, Trisha, I hate to say it, but the only thing that is "mean" is the sight of you and if somebody had the guts to tell you you'd probably be a darn sight better off today and although you may not understand what "obese" means, you surely understand that you are an outsider, have no boyfriend and mainly girlfriends who abuse you as a juxtaposition to their own slimness.

What is the main difference between cancer and obesity? The main difference is that the latter is mainly self-inflicted whereas the former is mainly not and while I find the fact doubtful that "white lies" towards the terminally ill seem to have become defunct, I find the fact that those children are for political correctness' sake smothered with euphemisms scandalous. And that, mind you, when they, different from the terminally ill, could DO something about their situation.

As virtually anything in the claws of political correctness it is all about power.

Of course, the lever in this power struggle are girls and women. Girls and women are more gravely stricken by overweight and obesity because looks are considered more important for a female and they make up the majority of obese (not overweight) people, plus, their causes are given more attention anyway. To oversimplify: Men can't be victims, only perpetrators. So let's our main focus be the obese women and girls community.

I don't share the condescending attitude of all those gestagen-type, naturally slim women towards their less fortunate sisters and their definition of "fat", a definition, which usually starts at wearers of anything bigger than a size 8 at a height of 5'10". As somebody who is constantly fighting a sometimes successful but always gruelling uphill battle against age- and hormone-induced weight gain myself, I do, however, resent the victimology mentality that is slowly creeping in everywhere and which has taken over the fat-women-community long ago.

After holocaust survivors, cancer survivors, rape survivors, abuse-of-various-sorts survivors, we now have – obesity survivors! The terminology reveals the agenda: "Something bad has happened to me and it isn't my fault".

The cult of non-accountability tells them that it is not their own duty to seek therapy and general help and that they might – just might – try to eat less and start some exercising. Quite the contrary, they are told they are "victims", an outlook that is widely sanctioned by the members of the politically correct psychotherapists' fraternity, too, who are shit-scared of losing their sinecures.

Thus, a perverted system of female solidarity has evolved. Fat women get encouragement, support, even acclaim, for an unhealthy and hideous-making lifestyle. Feminists WANT women fat. They want and need to proselytise women who feel that they are ugly and potentially rejected by men. These are the first and easiest prey for an ideology that fosters men-hating. There is no more viciously malevolent and asocial sentence than "There there, I can relate to you" from the non-obese sorority because anybody who isn't that fat damn well can't. Or can you imagine how it is to haul with you a flabby load of 30-plus kilos of grease anywhere you go, a load that makes you look like a sickening cross between a beetroot and a tub of lard? No sorry… I can NOT relate to that and I don't want to. How degenerate has a society become that submits a basically healthy teenager to surgery to force her not to stuff her face with food anymore and calls it "adolescent obesity surgery".

And where are the parents who have only too obviously never told her anything like: "No, you can NOT have another BicMac/more white chocolate/whatever. Anything not to cramp a child's style, or "run the risk of making it angry", right?

Of course, all this being part of a major power struggle, there is a fierce clash of opinions about the accuracy of the statistics provided, specifically by those responsibility-removal organisations whose goal it is to fix whether those stats are accurate or not. There are, too, organisations that aim to entrench "fat acceptance" securely within the public awareness by stating that fat is just another sort of lifestyle, sortof like prescribing tranquilisers to somebody suffering from the squits so that he (or rather she) doesn't mind shitting her pants anymore.

However accurate or sloppy those statistics on the cost of overweight and obesity may be (one mentions for the USA a cost of about $117 billion with $61 billion direct cost and $56 billion indirect cost), it can be fairly assumed that they are comparable to the damage done by smoking.

Having said that, the fact that one vice is fought with all politically correct might, and successfully so, whereas the other is shunned in the name of the same political correctness and not even recognised as a vice at all, is the most powerful evidence for the political agenda behind it.
By The_Editrix At 18:22

Obesity needs to be treated like a real disease. I was overweight as a kid and later became obese. Look at these obese children and ask yourself what will be the quality of their lives?

That is EXACTLY what I am saying. What on earth made you think that I wouldn't want those children treated?

I just think that it is absurd that it should be necessary to submit a (basically) healthy youngster to crippling surgery. Parents shouldn't let him or her get so fat in the first place and doctors shouldn't pussyfoot around the condition.

Those children and youngsters are the victims of the adults and a perverted cult of political correctness.

The problem is, we live in a schizophrenic, idiotic, litigious society where everything is somebody's fault, somebody should pay us for it, and there is nothing more unforgivable than not measuring up to some arbitrary, artificial standard of appearance. People are getting their kids nose jobs and breast enhancement surgeries when they are barely teens---why not "fat surgery" and why not make it somone else's fault so they won't have to pay for it? Do you have any idea how vacuous the average human is?
As a fatty myself, I am wearied by the euphemisms. Why the hell can't we just say "fat"? Why is that word so emotionally charged? Personally, I think that's the first step towards normalizing and dealing with it. The problem is that you have all these stupid women who are embarassed that their fat kids don't fit into their designer lifestyles. Being fat has become as much a control device as becoming too thin. Mad at your Mom? Gain a few pounds---she won't be able to show her face at the country club. The problem is that it's not about health or normalcy, it's about image. Until we grow up and get a better set of values, we are going to mishandle this just like we mishandle everything else. I don't hold out much hope.

Syler, did you read my entry about JonBenet Ramsey?

The American beauty (or what is CONSIDERED beauty) cult is absolutely perverted!

A SYDNEY hospital has become possibly the first in the world to appoint a doctor dedicated to treating overweight children in an urgent attempt to tackle the nation's obesity epidemic. The appointment, at The Children's Hospital at West mead, comes as the number of overweight and obese children surveys to more than 1.5 million and health systems struggle to deal with the fallout. http://www.phentermine-effects.com

That is a big step in the right direction. Thank you for your information, Dr. Wills.

Tiptoeing around the facts because someone's feelings may be hurt is asinine. Better we lay the cold honest truth on them early so they realize the extent of ramifications their lifestyle will have on them. Ladies, if you are obese the quality of the men you can attract is going to suffer, period. Forget the prince charming, you'll be lucky to get the toad. Obesity is not a disease and not a protected class. You will be openly discriminated against and will suffer in your career, your health and your social standing. Better you know early when you can do something about it.