I am not particularly interested in football, but the current situation somewhat forces one to notice.

My office is in a house fairly removed from any living quarters and on the third floor to boot. We somewhat reside on top of the world, as it should be. From time to time, the world around me is shaking. It's not anything particularly loud, just a faint, vibrating roar. Then I know that Germany has scored another goal.

Yesterday evening Germany reached the semi final by a shootout. I happened to be driving when the match ended and got stuck right in the middle of a huge car parade. From what I saw here, as far removed as possible from the actual scene of the match in Berlin, the entire German road network must have been a gigantic car parade. Cars totally covered in German flags, kids on the bonnets, on the roofs, waving flags, speeding, shouting, whistling, honking their horns...

To me, the entire spectacle resembles a yobbofied version of the Carnival in Rio. And no German police anywhere distributing tickets... Absolutely stunning! I had no idea we had it in us.

Of course, the heavenly weather adds to it!

And it's not just the kids. There are middle-aged men gleefully making fools of themselves with the help of fatuous hats or wigs, OLD men wearing black-red-gold transfers on their cheeks and no child is too young to be spared its parent's patriotic exhibitionism. 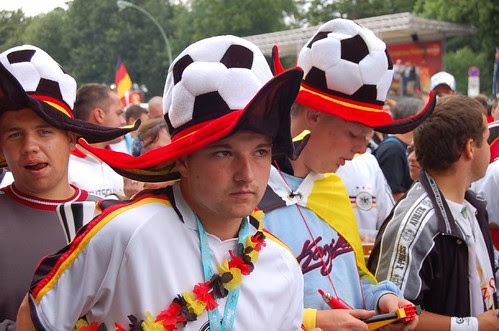 But now and then, the old German party-pooper spirit raises its ugly head. They can't help it, really. I suppose it's a sort of mental flatulence that HAS to find its way out, or they'll burst. Earnest-minded do-gooders chime in and remind us that it's time to kick off (pun not intended) a new "patriotism"-debate (whose outcome is clear anyway: we are against it) and a psychologist on some crappy radio show gives gratuitious advice how to behave in the case of defeat and (I am not joking!) in the even "worse" case of victory!

As if the kids in their cars would drive straight on eastwards after a victorious final and re-capture the former East German territories, clobbering the Poles to death with their flag handles.

I personally, don't mind if Germany does NOT become world champion. Let the best team win. But I DO hope they will at least make the final to keep up that great party spirit! It's shitty enough being a German at most other times.

Here is an interesting bit of information, of which I happened to come across at a site named IndianMuslims.info, of all places:

Germany have 90-year-old to thank for making semi-finals

For it was the former referee Wald who came up with the concept of the penalty shoot-out in the first place.

It appears rather fitting that a German should have conceived the idea. After all, German teams seem to have perfected the concept and Friday's victory against Argentina was the fourth time that Germany was involved in a shoot-out at World Cup level.

And they won all four times, missing just one penalty in total!

Wald first came up with the idea in 1970, and the 90-year-old is still proud of his brainchild today.

"It's the only way in which a result can be achieved fairly. Everything else was not really a solution," he says.

Until Wald came up with his idea, matches were mostly decided on a flip of the coin or by the drawing of lots. Seldom a replay was ordered.

As late as 1968, European Champions Italy had made it into the tournament's final after being drawn out of a hat following a goalless game in the semi-final against the Soviet Union.

"That was not a victory, that was nothing," Wald recalls.

But Wald, who received his referee's license in 1936 and officiated more than 1,000 matches in 40 years, faced reluctance at first. The Bavarian football association attempted to block his proposal when it was put forward in 1970.

It was only when the majority of delegates said they were in favour that the officials gave their backing.

The rest is history.

The first major tournament to be decided on penalties was the 1976 European Championships, when German Uli Hoeness blasted his penalty well over the bar and Czechoslovakian Antonin Panenka scored to give his side victory.

The first World Cup match to be decided on penalties took place in 1982, and again Germany were involved. This time the Germans won, beating France in the semi-final. Twelve years later, in the US, the World Cup champions were for the first time determined on a shoot-out, with Brazil beating Italy.
[...]
The former miner and unionist retired at 63. But he continued to officiate at matches for a further 12 years.

And though there continue to be criticisms of his idea, the penalty shoot-out remains the way in which most drawn matches are still decided.
[...]
"I always believed that I was right," Wald maintains, pointing to the many exciting penalty shoot-outs that have taken place over the years.

On Friday afternoon, millions of German football fans will have agreed with him.