Or: "This is not our problem."

Many of my non-German readers will have never heard of Peter Fechter.

Who was Peter Fechter?

Peter Fechter was a young bricklayer from East Berlin. He had tried to flee from the GDR (German Democratic Republic) to the free West together with his friend Helmut Kulbeik by climbing over the Berlin Wall near Checkpoint Charlie.

When both had crossed the death strip and reached the six-foot-high barrier with barbed wire on top, border guards fired at them. Kulbeik managed to cross the Wall, Fechter was shot in the pelvis in full view of hundreds of witnesses. He fell back into the death strip where he remained in view of Western onlookers, journalists and the American military. Despite his screams for help, he received no medical assistance either from the East or the West side. The only bystander who made any effort to help Fechter was a West German policeman who dropped two first aid packages over the Wall. 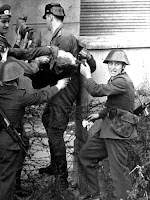 According to a TIME Magazine report:


One conscience-stricken U.S. second lieutenant could stand it no longer, picked up the "hot line" telephone to Major General Albert Watson II. the U.S. commandant in West Berlin. Back came the order: "Lieutenant, you have your orders. Stand fast. Do nothing." Not knowing the reason for the Americans' inaction, an agonized crowd swirled around the command post crying: "For God's sake, go get him." When a German reporter asked why the American troops did not rescue Fechter one G.I. replied, "This is not our problem."

World War III was thus safely avoided and Peter Fechter bled to death within the hour. Today, 45 years ago. He was 18 years old.

Was justice done after the fall of the Berlin Wall?

In March 1997, two former East German border guards, Rolf Friedrich and Erich Schreiber, faced manslaughter charges for Fechter's death. They were both convicted, and sentenced to one year's imprisonment on probation.

The successor party of the SED, governing party of the East German dictatorship, can currently boast 8.4% in the German Bundestag (the federal parliament) and 6.1% in the European Parliament. In the federal states within the realm of the former GDR, they clock up a vote between 16.8% and 28.0%.

The official count of the Berlin public prosecutor knows of 270 deaths at the German-German border and the Berlin Wall. In 2005, the Senat, the Berlin city council, refused to elevate Peter Fechter's grave to the status of an Ehrengrab because such a status is confined to the circle of those "who deserve credit for services for Berlin and performed beyond Berlin's borders". 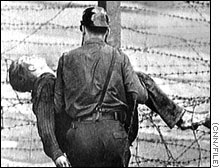 My older blog entry A Collective Psychogram may be interesting in this context as well.
By The_Editrix At 18:12

Yes, a different kind of the so called "Ostalgie".

Myself beeing an austrian I visited the late GDR once as a youngster, it was an eyeopener.