When a Nazi poofter in lederhosen speaks the truth, something stinks!

The following is (almost) incredible. And while it is sad that anything like that could happen at all, it is even more sad that only political parties right of center, including the BZÖ, party of Jörg Haider, has the backbone to resist politically correct pressure and speak up against the immanent danger of Islamisation. 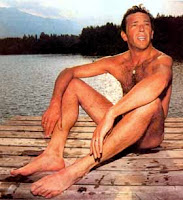 Demonstratively lederhosen-less: This picture of Haider was published 1994 in "News". I found it here. The article covers the discussion about Haider's alleged homosexuality against the background of the strong homoerotic overtones the Nazi male society generally carried. The article is an interesting read, but It is not truly germane to the topic of this entry.

I am reminded of the old joke, saying that the Austrians are clever people who managed to make a German out of Hitler and an Austrian out of Beethoven, having thus placed the reponsibility for the Nazi past firmly at the feet of their German brethren. Maybe it is that very sort of callousness that enables them to let a cartoon character who looks like a poofter in lederhosen (I’m pretty sure that guy had a facelift and wears makeup, mascara and all!) become a serious politician. And the fact that this erstwhile "yuppie fascist" and his ilk, of all people, are left to speak the truth just shows how far we have gone already down on our self-paved path to hell.

This is from the Austrian newspaper Kurier:

Three Muslim fathers demanded obligation wearing of a hijab for female teachers in an elementary school in Linz, which caused a lot of anger. Landesschulratspräsident [senior official in charge of state schools] of Oberösterreich [Austrian federal state] Fritz Enzenhofer spoke of "insanity" and made it known immediate steps had been taken. Herbert Kickl, secretary-general of the FPÖ [center-right political party] demanded in response a "hijab ban" in schools. BZÖ spokesman Uwe Scheuch called the demands of the Muslims "inacceptable".

The school … is considered an integration elementary school. The native language of three quarters of the 178 children is not German. A teacher sent a letter to the staff council, in which she complained in the name of her colleagues about three fanatic Muslim fathers - two Bosniaks and a Chechen. They demanded that the (female) head teacher and all (female) teachers wear hijab. Further, that the children must not be reproached publicly by their (female) teachers. On top of that, they denied the (female) teachers the "Sie" address [German form of address of respect for people with whom one is not on buddy-terms, gramatically comparable to the English "you". While in English the familiar "thou" has been replaced by first-name-usage, it's still used in German ("du") and can be highly offensive -- AND regarded, depending on context, as a criminal offense -- if applied to somebody with whom one is NOT on buddy-terms!], because they, as women, did not merit this. In addition, their pupils were not to participate in singing performances, which would be "prostitution". And no teacher should be permitted to ask why the daughter does not participate in swimming, one of the fathers demanded. The teachers ought to consider themselves lucky to have so many Islamic children, otherwise the school would have to be closed down.
[…]

He [Landesschulratspräsident Enzenhofer] would expect that an Islamic organization would speak up and state that such a parental behaviour was undue and to discipline their own people. He referred to the option of removing children from a public school to homeschool them [which is, different from Germany, basically not banned in Austria] and forwarding proof for it.

FPÖ secretary-general Kickl stated that immigrants had to adapt to the customs common in Austria and not the other way round. Hijabs for teachers are out of the question. "Rather, a hijab ban in schools and all public institutions, which France introduced already, seems now necessary." BZÖ spokesman Scheuch affirmed that it could not be tolerated that Muslim fanatics should force their customs upon the domestic population: "If they don’t want to conform to Austria, they are always free to leave the country".

Thanks to Kewil who posted this in his Blog Fakten und Fiktionen.

Postscriptum: Maybe this will provoke some second thoughts with our American friends, who know squat about German history, mentality and tradition, but who nevertheless so stridently demand that we Germans introduce homeschooling, although I doubt it.
By The_Editrix At 09:10