The German Selective Perception of "Threat"

The more real a possibility of a war becomes, the less interested the peace movement gets, or so it seems. Or is it a matter of the originator? Or the informer? However, the silence is deafening.

Here is what the newsservice of the International Christian Embassy Jerusalem has to tell:

Iran has purchased Russian-designed ballistic missiles from North Korea with a range of 2,500 kilometers, the head of IDF intelligence Major General Amos Yadlin said Wednesday, confirming a recent report out of Germany.

With North Korean assistance, Iran could already target Israel with its 1300 km range Shahab 3 (No Dong class) missile. But with the acquisition of the Russian-made SSN6 missiles (known in the West as BM-25s), Iran has extended the range of its ballistic capabilities to now take in much of Europe and parts of the Middle East previously out of reach. Some of the missiles have already arrived in Iran, Yadlin said.

The disclosure confirms a report in the German publication Bild that Iran recently received 18 of the BM-25 missiles from North Korea.

In a lecture earlier this month, Israeli missile expert Uzi Rubin - considered the father of the Arrow anti-missile defense system - suggested that German intelligence likely leaked the report to the press out of concern the country was now within Iran's range. Rubin said he also suspects North Korea may just be a conduit for Russian missile sales to Iran.

The purchase of the BM-25s has allowed the Iranians to leapfrog over their Shihab-4 missile program, which has a projected range of 2,000 kilometers and has been under testing for nine years with spotty results.

Ha'aretz adds that American intelligence sources say Iran is at an advanced stage of developing a missile that can carry a nuclear warhead. Washington has informed the International Atomic Energy Agency (IAEA) of the details of the Iranian missile program.

When the military operation in Iraq was imminent in 2003, Henryk M. Broder gave a scathing account in his Tagebuch (diary) of the average German idiocy and their hypocritical, hysterical hyperventilations:

To help Saddam out of his self-made predicament, the same three claims are always made. First, the German constitution outlaws any war of aggression. Second, a war is no solution to anything and peace can't be achieved by force. And third, any intervention in Iraq would "destabilize" the whole region and probably even lead to a "World on Fire". This opinion is shared, among others, by Jürgen Fliege (Protestant pastor and talk show host) and Katja Ebstein (popular singer), Bishop Kock (President of the German Protestant Church) and Cardinal Lehmann (President of the German Conference of Bishops), Günter Grass (Nobel laureated writer) and Peter Gauweiler (diehard Bavarian politician), the No Angels (girl group) and with them thousands or even millions of practicing pacifists who are gathering these days to form "Chains of Light" and who jointly take part in events called "Beat Your Drums for Peace", " Honk Your Horn for Peace ", "Be Silent for Peace" and "Sleeping for Peace". [Translator's note: This is NO satire!] 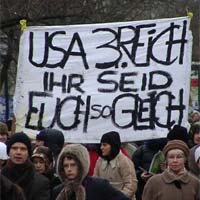 Usa 3rd Reich
you are so alike

All those suicidal braindeads are, mind you, from what would be normally called the "educated classes". Considering such a squad of educators, role-models and paragons, is it really amazing that Germany ended up among some third world-countries in the PISA-study of 2003?

It seems that, for Germans, any war is no war as long as it isn't started by the (notabene!) arch-enemy America. Pictures from peace rallies speak volumes. Like those ethically-challenged lemmings who went to Baghdad to offer themselves as "human shields" for poor, innocent Bubba Saddam, there is no pacifist lifting as much as a finger now when that unshaven monstrosity Ahmadingbat from Iran is now threatening to wipe Israel off the map (okay, that may fulfil many German not-so-secret wishes, but do they really think he will STOP there and then?) and openly boasts his firepower. He is, after all, not American.

I have forgotten who said that the Germans will never forgive America for liberating them, but if you look at those pictures (taken from the Broder-article I quoted -- there are more to enjoy, btw.) it becomes obvious that this is the sad truth, not just some wisecrack. 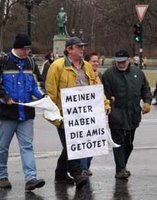 German sense of historic justice: "The Amis killed my father". So what better reason can there be to hate them?

But the monstrous idiocy doesn't end here. Just one more dose of it as quoted by Broder:

Equally substantial is the claim that war isn't a problem-solver. "There is no war that could help to bring about peace or even civilized conditions," says theater manager Dieter Dorn from Munich, on behalf of many. We ought to be "prepared to communicate with the opposite side" and "realize that the cause for terror and dictatorship can be found at our end as well". Dorn belongs to those who took the attacks of September 11 as a sort of invitation to an intercultural dialogue. If somebody were to raid his house and flambé his dog, would he invite the perpetrator for breakfast at the "Bayerischer Hof" the next morning to discuss "issues" with him?

It is amazing, that he didn't protest more vehemently against the "civilized conditions" that can be blamed for the fact that he only manages Munich theaters today instead of entertaining the "grossdeutschen" troops at the front near Novosibirsk. The doggedness that makes German intellectuals and artists deny the idea that they owe their life and careers to a peace that had to be accomplished by bombs, their disability or lack of goodwill to imagine what would have become of them had that war not been waged, is as infantile as those slogans currently flaunted at peace rallies "War Is Uncool!" and "War Is Shit!"

A claim that, not surprisingly, didn't apply when it came to supporting the liberation movements in Angola, Mozambique and Vietnam.

Those were the days when Good and Evil still existed and war against the occupiers and oppressors was, of course, a good war. Nowadays Claudia Roth (leading Green politician) talks about the necessity of a "non-military disarmament of the Iraq" as if she had discovered a secure and neat method for asexual reproduction, and a prominent elder of the peace movement, who doesn't even want to deliver gas masks to crisis areas, can't remember that he, in a former life, used to collect money to buy "weapons for El Salvador".

So what has changed since 2003? Not much. Broder was kind enough not to mention the name of the "elder of the peace movement", the Green politician Hans Christian Ströbele. The same Ströbele recently blamed in a TV chat show the United States and co-guest Richard Perle of planning an attack on Iran with nuclear weapons. The very Ströbele, who thinks that Iran has the right of using nuclear technology. Ströbele who thinks that, if Iran is banned from having nukes, Israel ought to be too. Yes, that very Ströbele who described Iraq's missile attacks on Israel during the first Gulf War already as "the logical, almost unavoidable outcome of Israel’s policies", thus following the old and cherished German (although not EXCLUSIVELY German) school of thoughts, which maintains that antisemitism is the Jews' fault anyway.

As the Iran's nuclear ambitions are just a response to American aggression and have thus per definitionem nothing to do with war and can't be a threat.


(See my entry Cacophony regarding Germany's "special relationship" with Israel. Translation of the excerpts from the Broder-article by me.)

I discovered your site via your posting on Belmont Club. It's so very nice to see a sensible European. I know that there are many of you, but Europeans don't often post comments on American (or in Wretchard's case, Australian) blogs.

I hope to see you post more comments on Belmont Club, LGF, Varifrank, and others. Meanwhile, I've added your site to my link bar.

Sometimes I think the entire world is going crazy. Thanks for being sensible.

Promethea, comments like that make my little anklebiting effort worthwhile.

I have even a LGF-login ID, but forgot the details a long time ago (can you believe such stupidity?) and they have banned new members.

If you email Charles, he may suggest a way for you to recover your LGF-login ID.

I especially like LGF because so many interesting people make comments on it.