PETA protesters in Vienna. The placards say "Thou shalt not kill" and "We are suffering and dying for your nutritional sins." (Pictures: ORF, KURIER and Kronen Zeitung.)

This is from WorldNetDaily, the hyperventilating yellow press section of the "conservative" American media, but sometimes they have a point, and certainly in this case:

The edgy animal-rights group People for the Ethical Treatment of Animals stirred controversy in Vienna on Good Friday with a protest to symbolically "crucify" three activists wearing animal masks outside the city's famous Catholic cathedral. 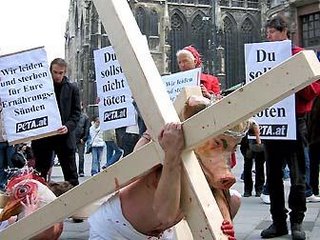 The blood-smeared activists each carried a cross as nearby protesters in the square outside St. Stephen's Cathedral held signs with messages such as "We suffer and die for your sins of nourishment."

Bruce Friedrich, spokesman for PETA in the U.S., told WorldNetDaily causing offense was not the goal, but if there are any objections they should be about suffering animals, not "street theater."

PETA said it wanted to capture the attention of consumers who ignored the suffering of animals, but the local parliamentary representative condemned the protest.

A spokeswoman for Ursula Stenzel of the conservative People's Party called it a "mockery of a religious community on one of the most important days of the Christians."

"The action would be more blasphemy than animal protection," said Angelika Mayrhofer-Battlogg, according to the South African news service News24.com.
St. Stephen's Cathedral in Vienna

The Catholic Archdiocese of Vienna, News24 reported, called the action a "completely unacceptable falsification of the religious dimension of Good Friday."

The statement said that while PETA may have good intentions, the crucifixion of Jesus Christ was not suited "to transport secondary messages."

Also, the square outside St. Stephen's, built in the 12th century, was a "sensitive" place.

Friedrich pointed out Pope Benedict spoke out against abuses in factory farming when he was a cardinal, but the PETA spokesman believes the church "could speak out more voiciferously" and should be on the "forefront" of protests.

But why pick on Christians and the Catholic Church with such a provocative demonstration?

"There's no intention to pick on anyone," Friedrich replied. "We attempt to raise anyone's awareness that eating meat is a violation of all religions, the spirit of compassion that infuses all religions."

Friedrich added that, "As a Roman Catholic myself, what I find offensive is that Christians would deny God's creatures their every desire and need and cause them to suffer."

Oh my oh my, this is so full of excrement in so many respects... where am I supposed to start? Well, let's start right at the top. As far as the Pope is concerned, I, for one, think he rather ought to "speak out more voiciferously" and should be on the "forefront" of protests against the murder of innocent Christians by rioting Muslim hordes. But maybe that is just me.

As for the "As a Roman Catholic myself..." bit, it reminds me embarrassingly of the "All my Jewish friends are saying too..." blahblah that invariably rises its ugly head when it comes to the justification of some specifically heinous crime against the Jewish people. Since when are self-hating miscreants a yardstick for anything?

It is interesting, however, that PETA were playing the same dirty trick in the USA in a much toned-down version and that it was nevertheless refused at least, at local level, by billboard companies. I suppose we can be grateful that Christianity is not a dirty word in America -- yet.

PETA has a long and disgraceful history of disgusting ethical relativism, of which the "Holocaust on your table" abominality was only one instance. Mind you, I think we, as the human race, have a long way to go when it comes to animal PROTECTION (animal RIGHTS is an ethical non-starter anyway) and I would be much more open to animal protection causes weren't the people behind it such appalling, unethical hypocrites. Remember 2003, when PETA president Ingrid Newkirk wrote to the unshaven monstrosity, then Palestinian Authority chairman Yassir Arafat, a fawning note: "Your Excellency, We have received many calls and letters from people shocked at the bombing. If you have the opportunity, will you please add to your burdens my request that you appeal to all those who listen to you to leave the animals out of the conflict?"

Why did Ingrid write that? On January 26, 2003, Palestinian terrorists had rigged up a donkey with explosives and sent it towards a group of Israelis at a bus stop near Jerusalem, hoping to kill and maim as many of them as possible. The two bombs were detonated, but fortunately for the Israeli bus passengers, the donkey exploded before it reached them.

Ingrid's take on the humans targeted by the terrorists? She said that they were not her business.

So, acording to Newkirk, humans are not fellow animals woth to be protected from harm, a status even my dogs are granting me. Whom I will teach to treat and use Ingrid as a peeing pole, should we ever meet, and thus give her existence one useful purpose, at least and at last.