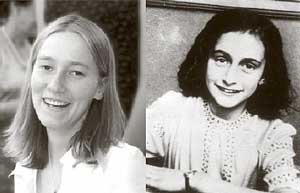 Can one get more disgusting than THAT? The Washington Report for The Promotion of Terrorism is discharging not just its everyday hateful, terrorist-loving garbage, but has, this time, sunk to a new all-time low landing even below its customary level of hatred, bile and lie with a nice little bit of not-so-subtle Holocaust relativism.

Do you get that? They are comparing one of the victims of the Holocaust of the Jews of Europe, a young girl who has through her humanity and valour in the face of death tragically become a symbol and an icon with a loud-mouthed, hate-filled, spoilt brat whose main accomplishment it is having taught a bunch of mildly amused Arab children that, yes, we Westerners can hate just as much as they do.

I don't usually read that unspeakable cesspool, but that picture happened to jump on me, notabene at the top of the hit list of a Google search regarding the Caterpillar annual meeting last Wednesday, a finding, which is not some weird happenstance as they are sometimes delivered by Google, but which is part of an agenda.

At the meeting, the discussion, to the disgust of Caterpillar Chairman and Chief Executive Jim Owens but not too surprisingly, had been hijacked by a group of people pushing a non-business topic, namely what the Chicago Tribune called delicately a ''discussion about geopolitics'', a prizeworthy euphemism for what was, by any other name, an anti-Israel hate-feast.

For more than two years now, this ''discussion about geopolitics'' has made Caterpillar the focus of a high-profile public relations campaign, although with limited success, at least as far as the company's business policy is concerned. At last year's meeting, 97 percent of shareholders voted down a proposal that called for the company to review its sale of bulldozers to the Israeli government. There was no similar proposal at all on this year's agenda, but the ''non-business topic'' dominated the meeting nonetheless. One of the speakers at the meeting was Craig Corrie whose daughter Rachel had died in 2003 after being crushed by an Israeli bulldozer, as she sought to prevent the destruction of a Palestinian edifice.

Corrie's arguing: ''Maybe you don't want to choose sides (but) ... you're choosing the side that uses these machines as a weapon.''

Different from choosing the side, of course, of those who choose meat bombs to blow up other Rachels at cafés, supermarkets, discoes, shopping malls or on busses in Israel.

Of course, the same line would serve well as an argument for banning, say, kitchen knives (domestic accidents are heading the statistics, at least here in Germany), but to peace activists it's not so much the tool or the intent that matters, not even the victim, but who is handling the tool. Like Michael Berg, I am sure, Craig Corrie would have gladly blamed it on President Bush, the "neocons" or the Republican Party had Rachel's head been chopped off deliberately, cruelly and callously by some Islamist ''freedom fighters'' and I have still to meet someone from the kafijeh (sp?) clad brigade asking for the ban of building cranes because the Mullahs like to hang people from them.

However, back to the meeting. Caterpillar was of the opinion that they have neither the right nor the means to control how buyers are using their machinery, which shows a surprising lot of common sense. 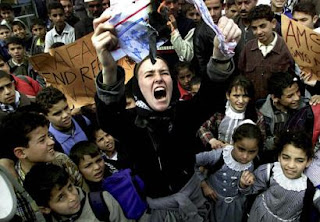 Rachel Corrie, discussing geopolitics and the spiritual heritage of Anne Frank with Palestinian children in a peaceful manner.

Trying to be fair and just, the Chicago Tribune article, daft as it may be, is considerably more balanced than the majority of other mainstream media reports with their tales of "piece activist" Rachel Corrie who died shielding a Palestinian ''home'' (a lower middleclass-ism, the usage of which alone ought to be enough to disqualify a hack from any further writing anyway).

This Rachel just trusted the decency of the targets of her hatred and overestimated their field of vision. Her lippy parents, who brought up a daughter to hate her own country to which she owes everything, are a darn sight more guilty of their daughter's death than any Israeli bulldozer driver could ever be.

And that is where her story begins and ought to end.

However, with a geopolitical discussion that refuses to go away peacefully (like ISM activists, really), a few facts might be in order: On the day of Corrie's death, soldiers had to stay in their armoured vehicles and were not able to direct bulldozers or remove protesters everywhere because of threats from Palestinian snipers. The Israeli army commander of the Gaza Strip, in an interview broadcast on Israeli television, said, too, that IDF soldiers may have been handling other activists instead of watching over this particular bulldozer. Because Caterpillar D9 bulldozers have a restricted field of vision, Israeli army regulations normally require that other soldiers assist in directing bulldozer drivers.

Of course, it would be only fair and just to expect that the IDF, totally and entirely, victimise themselves to shield those hell-bent on their and their people's destruction, which would be, incidentally, a fine way to solve the Middle East conflict and the "Jewish question" at once. 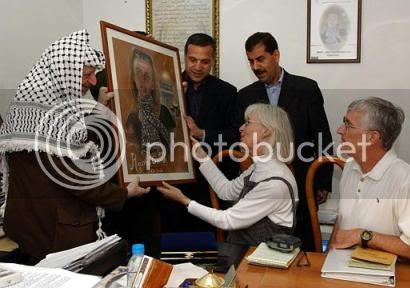 But seriously, it will never cease to amaze me that the IDF is still performing nanny jobs like that at all -- shadows of Jenin, where the IDF chose street fight to minimise civilian deaths, which killed 23 Israeli soldiers when they could have bombed the town into stone age, are looming -- when they will be reviled whatever they do anyway. The parents who are sueing the IDF because the unnessesary death of their sons have my full sympathy.

The fact that the ''home'' Corrie was shielding was actually covering one of those tunnels used by Palestinian terrorists to smuggle weapons, drugs and prostitutes from Egypt into Gaza adds some additional spice to the story, as do the pictures of the parents of this reincarnation of Anne Frank, rubbing shoulders with and giving a picture of their dead daughter to that unshaven monstrosity whose name I have forgotten and who is justly called the father of modern terrorism and who, as we all know, cared SO much about children.

And then, so we can safely assume, they all had a cosy little double-chinwag about geopolitics.

Why does the rise of Caterpillar's stock pleases me no end, even though I don't hold any?

There is a law prohibiting private individuals from engaging in their own foreign policy. Sadly, this law has not been enforced in years. The members of ISM and CPT should be prosecuted for violating the law.

I love the following quote,

"Actress Vanessa Redgrave, ...has paid a high professional price for her empathy for Palestinians..."

On the contrary, Redgrave has used her political agenda to advance her career.

She has even launched her own political party, "The Peace and Progress Party".

Her extremist opinions have landed her many interviews and has helped create enough publicity to revive her career (although, she never suffered from a lack of work).

It is amazing how in the West Socialists can make a rewarding career from being "oppressed".

"It is amazing how in the West Socialists can make a rewarding career from being "oppressed"."

What stuns me most is the intellectual dishonesty.

People make up their shit as they are going along. Here, it is the incessant whining about "One is not allowed to criticise Israel anymore", when it is, in fact, done all the time and mostly unfairly.

But all, which sticks to the public mind is: "It is not allowed to..."

But then, the public's average IQ is in the single figure range anyway.

Careful Editrix, here in the states our Leftists continually accuse the people of our Mid-West of being stupid. Mostly because they voted for my President, Mr George Bush.

The backlash has cost them and I have learned a valuable lesson.

Instead of saying that the people of the northeastern portion of my country are stupid, I would say that the Socialists in that region are stupid.

Then everyone is happy!!!!!

Oh I was far from accusing the people in the Midwest of America (whom I don't know) of stupidity. Besides, I was rather talking about intellectual dishonesty than anything else. The IQ reference was more of a metaphoric kind. I guess for this specific brand of stupidity it actually helps to have a university degree.

I said that Leftists in our country accuse the people of the Midwest of being stupid.

I did not say that you did.

Leftists in my country have made terrible statements about the Midwest and that has costed them severe political damage. This has been widely publicized in the US.