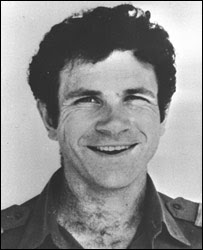 Thirty-year-old Sayeret Matkal Commander Lt Col Yoni Netanyahu was the the leader of and the only fatality among the Israeli troops at Entebbe.

30 years ago today, the legendary rescue of the hostages at Entebbe airport took place. It was a daring raid, even by Israeli standards.

The timeline is well known:

It ought to be a memorable day for any German, too. Only 31 years after the end of the Holocaust, Germans had returned to their cherished pasttime of "selecting" Jews including the intention of murdering them afterwards. 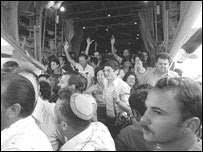 The fawning note by the KPD (the German Communist Party) addressed to "His Excellency" Idi Amin ensured the "deeply felt compassion" and "unlimited solidarity" of the KPD because of the violation of Uganda's sovereignity, an issue, which is usually not very close to the Left's heart. This should be remembered as well, specifically by those who are telling us that the Left can't be antisemitic.

And say a prayer for Mrs Dora Bloch, the old lady who was taken to hospital because of a heart attack and had to be left behind. She was murdered the next day, some say at Idi Amin's order, some say by him personally.


Thanks to the blog named Spirit of Entebbe. For more information go to the Jerusalem Post and the IDF website.
By The_Editrix At 22:15