The Child Molester as Kindergarden Teacher

"The Israelis did not start the war." "That does not matter." 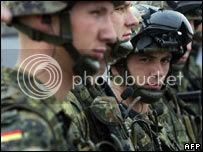 Since last Monday, Germany is making noises that they might consider sending troops to Lebanon as part of a multinational U.N. force if certain conditions were met.

Several European Union countries are ready to contribute to a peace force but problems remain about ensuring it can fulfil its mission, according to EU foreign policy chief Javier Solana on Monday.

German Defence Minister Franz Josef Jung said if both sides in the conflict and the international community requested German participation, it would be difficult for Berlin to decline. "We could not refuse a peace mission of this nature if these conditions were met and if requests were directed to us," Jung told German television station N24.

Of course it would and of I bet my arse they couldn't. It's the convicted-child-molestor-craving-a-job-as-kindegarten-
teacher-syndrome all over again.

This unstoppable urge is catering for two deeply-rooted German aspirations, namely to win back a role other than peripheral on the stage of world politics and to marginalise, or at least lessen, the influence of the USA in the Middle East (or anywhere else, for that).

Jung's case of political diarrhoea was so severe, that he even overrode Chancellor Angela Merkel who on Sunday had ruled out an immediate involvement of German troops.

Imagine the nerve to ask the very state that was founded in the aftermath of the Holocaust to lay down the weapons and cease defending herself against extermination and, as the perpetrator, to offer one's conciliatory assistance (a skill, for which the Germans are so well known all over the world anyway). Not to forget the traditionally excellent business and other relations with the Arab world, old and new.

But let's assume for argument's sake that those troublesome Jews would stop their petty ways and WOULD agree to have a German "peace force" in the region. Would it really help, such a peace force?

Maybe this rings a bell? Namely...

… the story of 17 or 18 German soldiers, ineffectively disguised as Lufthansa staff on the plane, that was waiting for the terrorists in Fürstenfeldbruck airfield. These soldiers deserted their posts 15 minutes before the terrorists and their hostages were due to reach the airfield by helicopter. Nobody was notified of their desertion ... the commanding officer Reinhold Reich gave the reasons for the desertion as:
1) The soldiers had nowhere to hide.
2) Fear of gunfire from outside of the plane.
3) The gasoline containers of the plane may have caught fire.
4) The disguise was imperfect and might have lead to their discovery.

The soldiers held a vote. It was unanimous. German law allowed for them to refuse participating in an operation that could endanger their life. After everything was over, the soldiers were not reproached in any way.

But it doesn't end here.

Just 54 days after the bloodbath at Fürstenfeldbruck, terrorists hijacked a Lufthansa plane and demanded the release of the three terrorists who had survived the "rescue operation" and were in prison in Germany ... The terrorists were released pronto… the commander and co-planner of the Munich massacre, Abu Daoud … wrote years later that the Germans had offered them 9 million dollars, to stage the hijacking in order to free the terrorists, and, of course, rid the Germans of a responsibility they were not willing to bear.

And to end this on an even more eerie note:

… Dr. Georg Wolf, deputy chief of the Munich police … blamed the Israelis for refusing to cower to the terrorists’ demands. Wolf: "Those responsible were those conducting the wars between Israel and Palestine, the Palestinians, I mean the Arabs." The interviewer is then heard saying: "As a host you are responsible for your guests." Wolf: "Yes, but as a host I expect my guests not to start a war in my home." Interviewer: "The Israelis did not start the war." Wolf: "That does not matter."

Writer, human rights activist and Wadi co-founder Thomas von der Osten-Sacken is quoted by Liza: "Germany never leads wars against antisemitic states." Or, as Café Critique put it:" The saving of Jews and Jewesses has always been considered disproportional in this country." (Quote provided by Liza as well.)

Which makes them, for the U.N., ideal "peace force" material, no doubt.

Quite interesting, that; I have long suspected that the pro-Jewish feeling in Europe generally was but a veneer for old, long-simmering hatreds. It is comparable to the strident pro-black statements issued by the Democrat party in the U.S. Both create a cloud of words, but no real action. The U.N. as a feckless, tottering inept mass of beauracratium has given cover to a whole host of ills, and may indeed provide a perfect cover for other countries to flex their muscles and to erode the power of Israel, one kidnapped soldier at a time.