'Orderly, champers! The swine is dead!' 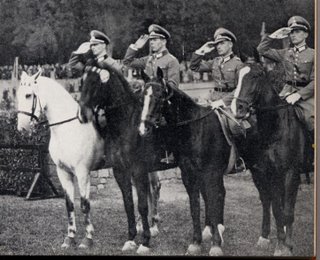 On a scorching hot July day like today, 62 years ago, Claus Graf Stauffenberg attempted, unsuccessfully, to assassinate the dictator of Germany, Adolf Hitler, in his bunker headquarters, the "Führererbunker" Wolfsschanze, near the town of Rastenburg in East Prussia. It had been the culmination of the efforts of the hapless and haphazard German resistance to overthrow the Nazi regime. Its failure led to the destruction of any semblance of an organised resistance movement in Nazi Germany until the bitter end.

Stauffenberg and his leading fellow conspirators are widely known. However, to mark the day, I would like to introduce one of the many interesting peripheral partakers in the plot.

On July 20, 1944, Harald Momm (second from right in the above picture), born November 15, 1899 in Trier, had been commander of the Heeres-Reit- und Fahrschule in Potsdam-Krampnitz near Berlin, which had in 1939 superseded the legendary Kavallerieschule Hannover.

Harald Momm, a veteran of WWI, had been on service at the Kavallerieschule since 1927. Originally considered a certainty for the show jumping equipe in Berlin 1936, he was transfered away from the school back to his regiment (the 16. Reiterregiment) some time before the Olympic Games because of a "clash of opinions" with his superior officer, General von Waldenfels. Waldenfels, commander of the show jumping unit at the school, had been, to be precise, pushed over by Momm and his mount during an argument over an equestrian matter.

It is said that on the evening of that fateful day, Momm had ordered champagne in the officers' mess: "Orderly, champers! The swine is dead."

While this is, as far as I know, apocryphal, it is a fact that Momm had the troups of the school march out on July 20, 1944 to support the putschists.

Not a very wise thing to do, but then, this was the man who had toppled a general by literally overriding him.

He was lucky. He was arrested but, different from many men who had done less, not sentenced to death. He was disrated from colonel to captain and transfered to the SS Brigade 'Dirlewanger', a penal unit for felons under the command of SS-Oberführer Oskar Dirlewanger, himself a twice convicted rapist. The Dirlewanger unit's "warfare" had raised objections even among the regular SS and for a man like Momm being transfered to such a unit was akin to being sentenced to death.

However, he survived to tell his tale. In his well-written and, for any horsey person, highly intriguing memoirs "Pferde, Reiter - und Trophäen" (Horses, Horsemen and Trophies) he tells, among other things, about his five years in a Russian POW-camp and how he survived in spite of the tuberculosis he had caught working in the mines. His saviour was the commander of the POW-camp who had acquired a little filly which he let Harald Momm groom.

Finally home, he became one of the few former officers of the SS Brigade Dirlewanger who were able to clear their names and was fully reinstated as colonel.

He became Chef d'Equipe of the German show jumping team after the Germans were allowed to take part in international equestrian competitions again. That was in 1951, I believe. He retired 1956 after the German equipe had won their legendary double Gold at the Stockholm Games.

Incidentally, Stauffenberg had been an alumnus of the Kavallerieschule Hannover as well, namely from 1934 to 1936, and this is where I intended the story to end.

However, I noticed a second man in the above picture and remembered that this man had not just been fatefully involved in the assassination attempt on that July day in 1944 as well, in fact, he had been on the scene, and that's why the story goes on here.

Heinz Brandt, on the right in the above picture, then a young first lieutenant, was born March 11, 1907. As captain, he had been a member of the Olympic Gold winning show jumping equipe at Berlin 1936. After the Olympic Games he gave up riding to focus on his career in the general staff.

On July 20, 1944, then a colonel and aide of the head of the operation unit of the general staff, General Adolf Heusinger, he was present at the briefing in the "Führerbunker".

It is common knowledge that Stauffenberg left his notecase with the bomb under a pretense at the scene of the briefing, and that the notecase was inadvertently moved to the opposite side of the massive plinth of the table, thus saving Hitler and killing, among others, the officer who did so.

This officer was Colonel Heinz Brandt.

He had been, on his deathbed, promoted to general by Hitler and his body had been, together with the bodies of the other victims of the bomb blast, laid out at the nearby Tannenberg monument. When his old father, another general, wanted to take his son home, he was told he couldn't do that, that the body had been cremated and the ashes scattered and that his son had been ... a traitor.

Momm's account is ending here. However, I found a source, which, apocryphal as it may be, might explain the otherwise inexplicable short time between the assassination attempt and the discovery of Brandt's part in the plot.

Here it goes: After the bomb blast, severely wounded, he had been laid down outside the "Führerbunker" in the blazing heat together with the other victims, joking about his lost leg and that it had given him trouble anyway all the time. Later at Rastenburg hospital, he became delirious and let slip how Stauffenberg could have done that to him, who had been a part of the plot as well.

Whether Stauffenberg didn't know of Brandt's involvement or whether he took the risk of victimising him will remain one of the many unanswered questions history is sometimes asking.

Heusinger, who played a decisive role in the post-war Bundeswehr and became its first Generalinspekteur (the highest ranking general or admiral), knew of the plot to kill Hitler but his understanding of "a soldier's duty" (the title of his memoirs) interfered with active participation. He remained unharmed and died 1982. Life is rarely fair.

Whether one finds it endearing or not, it is a fact that Germans have never been inspired at plotting. While those soldiers were tinkering with explosives and trying to solve the problem how to get close enough to an increasingly security obsessed Hitler until they had to resort to a one-eyed man whose single hand had only three fingers left, their opinion leaders were discussing whether tyrannicide is morally justified or rather not.

These retrospectives at high-ranking Nazis leave me with whole ranges of feelings: guilt, curiosity, pretended indifference.

If Colonel Brandt hadn't moved the notecase, and if Germans had succeeded in eliminating their own Fuhrer, I wonder how that would have altered the German national psyche and other nations' attitudes toward Germany. (Presumably for the better.)

I am not quite so optimistic.

A successful assassination would have most likely created a new "stab-in-the-back legend". I guess it was the best for the German psyche to drain this self-served cup to the dregs.

About how others might have judged Germany, well... Churchill, for example, refused to talk to the plotters. A putsch was not in the interest of the Allies for whatever reasons.

I, as a German, am once again baffled at the lack of common sense of my people. There was this nasty dictator and his nasty followership and those fucking dumb idealists, diplomats, pastors, academics, what the hell, were actually discussing fucking TYRANNICIDE and let a few isolated officers, who were hoping for a freak chance of getting close enough to Hitler, do the dirty work.

I'd have a hard time thinking of anything more sad and pathetic than that lonely man Stauffenberg with his one eye and only three fingers fusing that bomb.

And for that, he is still considered a traitor even nowadays by a considerable number of Germans in spite of all the politically correct bullshit and decreed commemoration.

As the editrix knows, Stauffenberg is one of my all-time heroes. I am thoroughly enjoying the book "Secret Germany" regarding his life and the conspiracy plot. Against all odds, my Texan daughter spent July 20 in Nuremberg...
As to Germans as conspirators, allow me to indulge in the most crass stereotyping and opine that the only reason y'all can't conspire is that you can't WHISPER. :)

In regard to the opinions of men like Churchill and Roosevelt, the fact that they are frequently portrayed as good men comes about by virtue of the fact that they are naturally compared with Hitler, and because biographies are written by the victors. Much of the politics surrounding the war is naturally eclipsed by the Holocaust. The Holocaust is so horrible in and of itself that most of us never get around to thinking about much else regarding that conflict. It would be interesting to see how creative the biographers would have to be if Hitler had not directed so much of his efforts toward genocide. At any rate, it's unrealistic to expect anything good from Churchill. He simply was not a good man. Neither he, nor Roosevelt, were likely to applaud anything, or cooperate with anything, that wasn't in their own very selfish political interest. No, they needed British and American military victories. A successful coup would have pretty much broken their hearts...

Germany is in no way the only country with a need to drain the cup of humility to the bloody dregs.

Thanks, as always, Editrix for a poignant and provocative blog entry. I light a candle for Stauffenberg, who was, at least, a good Catholic even if an unsuccessful assassin.

I wanted to add that, although I personally would probably have attempted an assassination much earlier in the game, I am notorious for acting on instinct and without thinking things out. Most of the decent actions of my life have been instinctive, as a matter of fact, but I have also managed some spectacular screwups. In this case, I can see both sides of the issue. While I understand the conspirators' hesitancy as logical and in some ways even moral, I think that there are times when peasants with pitchforks and torches are the only people who really understand how to deal with monsters. We are, after all, far more likely to come in contact with them than the denizens of the schloss...and we know that they cannot be reasoned with and they will not change--they have to be pinned through the heart and ignited...and sometimes, almost anything will do to fill the vacuum left by a dead monster.

I do NOT, however, think this should be a time for self loathing, but a time for sorrow and contrition and prayer for the dead, as well as prayer that we will respond properly and in timely fashion when our own crisis ripens--because each of us will have one, and hopefully it will be more private and of less consequence to others.

My Son in Law is a decendant of this family. His Grandparents are celebrating their 65th wedding anniversary. I would be so happy if I could present them with a photograph of his Uncle. If it is possible for a good size digital file of this photo to be e-mailed to me at ldpharmt@telus.net I would be thrilled.