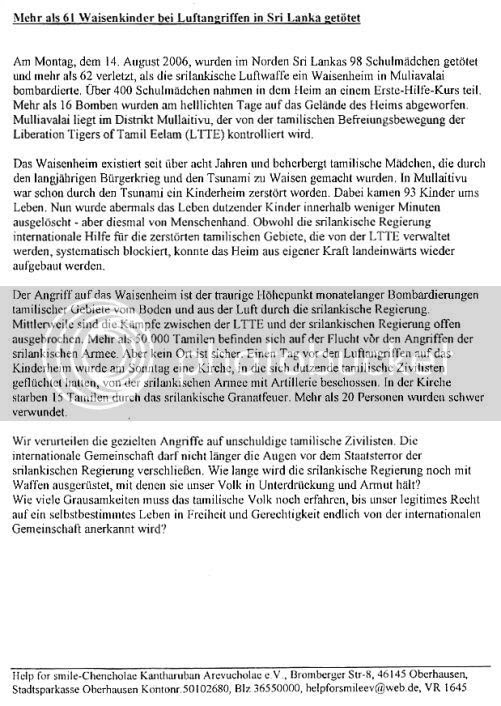 The civil war in Sri Lanka between the ruling Singhalese and the Tamil rebels is smouldering for decades now, with little attention here in the media and virtually none from the public. However, the bombing of what was described as housing for "child soldiers" by the Sri Lankan army finally made it into the news last week.

This flyer was given to me by Tamil neighbours. It was, so I was informed, drawn up as an refutation of the official line of the Sri Lankan government that those children had been "child soldiers" and thus combatants.

On Monday, July 14, 2006, 98 schoolgirls were killed in the North of Sri Lanka and more than 62 injured when the Sri Lanka's air force bombed an orphanage in Mulliavalai where more than 400 schoolgirls were attending a first-aid-classes. More than 16 bombs were hurled at the grounds of the orphanage in broad daylight. Mulliavalai is located in the district of Mullaitivo, which is controlled by the Tamil liberation movement of the Liberation Tigers of Tamil Eelam (LTTE).

The orphanage was established more than 8 years ago and is the home of Tamil girls who have been orphaned by the enduring civil war and the Tsunami. In Mullaitivo another children's home had been destroyed by the Tsunami and 93 children killed. Now again the lives of dozens of children were taken within minutes – but this time by human hands. In spite of the fact that the government of Sri Lanka is thwarting international help for the destroyed Tamil territories under the administration of the LTTE, the children's home could be re-built by own resources now more inland.

The raid on the orphanage is the lowest point of the months-long bomb raids on Tamil territories by the government of Sri Lanka. In the meantime, open warfare between the government and the LTTE rules. More than 50,000 Tamil refugees are fleeing from the raids by the Sri Lankan army. But there is no safe place. The day before the bombing of the children's home, a Sunday, a church where dozens of Tamil civilians were seeking refuge was shelled by artillery of the Sri Lankan army. 15 Tamils died, more than 20 were seriously injured.

We condemn the targeted attacks on innocent Tamil civilians. The international community must not close their eyes any longer to the state terror performed by the government of Sri Lanka. How long will they be supplied with weapons to oppress our people and keep it in poverty? How much more cruelty will have the Tamil people have to suffer until our legitimate claim to an independent life in freedom and justice is recognised by the international community?

I do not pretend to be an expert on the situation in Sri Lanka, all I know is that the civil war has cost an estimate of 65,000 lifes since 1983.

Also, granted for argument's sake that the bombing target WAS a "child soldier" training camp, that would imply that the Sri Lankan military doesnt't discriminate by age. Combatant is combatant.

Now I am asking myself… where is the outrage? Where are the candlelight vigils? The heartbreaking pictures (authentic or staged) of crying children? Where the human shields so graciously offered to an ugly dictator like Saddam Hussein? The UN resolution condemning the perpetrators? (The UNICEF broke their back and filed a protest, though, to be honest...) The useful visits of the White House, the Vatican and the EU of the representative of the Tamils? The media coverage of same visits? The calls for hauling up the Sri Lankan bloke in charge to the International Court in The Hague as a war criminal?
By The_Editrix At 20:13

I did read a description of the Tamil Tigers by Bernhard Henri Levi
it was less then flatering. I think his take on the situation is in the book " The End of Warfare".

He is a professional writer with amazing style even when translated into English.

Easy. No Americans or Israelis involved to protest aginst.

I understand your outrage.

The Tamil Tigers are a weird little group. They would make an excellent news story except for one thing: They are, technically at least, Christians, which automatically disqualifies them...

Actually, the liberal media is missing something big here because it would be a chance to indict ALL Christians based on the actions of the Tigers.

Those poor children. So many strike against them, yet too unPC to be fawned over by the Lib Media.

The whole situation is ghastly. ALL the political situations are ghastly and ALL politicians black with sin and evil. I think it will get worse before it gets better.