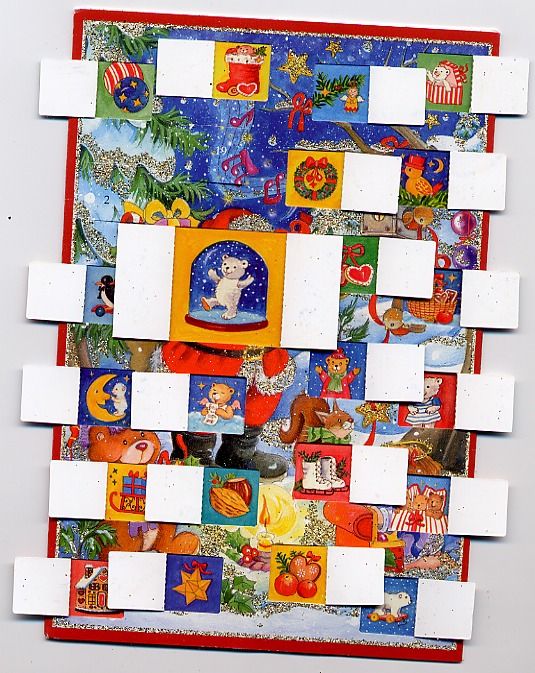 The customary Adventskalender (a Christmas countdown calendar) I get every year from friends showed for the 24th of December not the expected nativity scene, but a teddy bear.

Yes, you got that right. AN EFFING TEDDY BEAR! In a glass bubble.

Not that it there had been any reference to the origin of the holiday behind the earlier little "doors", mind you. But I really thought that the Christmas Eve one would reveal something related to, well, Christmas.

I thought I'd write about all that to vent my frustration and went looking what others might think and I came across a WND bit.

Usually, I don't read WND anymore. They are a tad too hyperventilating over their cause for my taste and –- worse -– they don't bother enough to back up their claims and I hate shoddy journalism. Even more so if it's supposed to be "on my side".

Frankly, since they (in February 2005 that was) published this little gem: "Women told, 'Work in brothel, or else' -- German law forces out-of-work females to take sex jobs or lose unemployment benefits" I can't stand them anymore. Back then, those brave champions of the conservative cause quoted an article from the Daily Telegraph, which in turn got their information from an article on jungle-world.com, which is, by its self-description, a "leftist weekly" and an "antigerman" one to boot, plus information found in an article from the "alternative" Berlin daily taz (incidentally another leftist rag), filed on December 18, 2004(!). The woman, a waitress, had been sent to a brothel instead to a reputable place because the employment center clerks hadn't the foggiest what this job offer was really about. In the meantime, German employment centers, appalled by the gaffe, have duly and dumbly asserted what was clear anyway, namely that they would not be passing on such job offers. There is, additionally, a German law as well, which states quite clearly that nobody must be forced to work as a prostitute, but who gives an aviating fornication for facts when it's such a juicy, drool-inducing little morsel of a story.

(As an aside: what can one expect from a medium that advertises SPECIAL OFFERS (in capital letters!) for "new natural lithium pill (that) fight(s) mood disorders" or a "secret to unplugging your toilet" (I kid you not!). They must be seriously in need of dough.)

But then, maybe even WND have a shame threshold low enough to remove that idiotic bit of writing. It used to be here:
http://www.worldnetdaily.com/news/article.asp?ARTICLE_ID=42615.
But then, maybe they don't and it was just removed anyway.

However, I thought they deserved a second chance and I read what a guy who looks like a German skinhead had to say about the sad deprivation of Christmas.

To cut matters short: I shouldn't have done it.


In Cuba, pastors are being detained and imprisoned without being charged with any crime, while their churches are being closed by the Castro regime.

In Peru, the government has finally ordered the arrest of its ''counter-terrorist'' soldiers who murdered five young men and a boy at a church service ... only 22 years after the murders were committed.

In China, four house church leaders were sentenced to years of ''re-education through hard labour'' on July 25. They will be forced to serve their sentence at the Langzhong Detention House, which, according to its director, was ''built for Christians.''

In Belarus, Pastor Georgi Vladimirovich Vyazovsky was arrested and sentenced to jail for ''holding systematic religious meetings in his home without permission from the local authorities.''

In India, Christians were attacked in two locations on December 17 by Hindus, after which the police registered a formal complaint against pastor Philip Jagdalla for ''hurting the religious sentiments of Hindus,'' a violation of section 295A of the Indian penal code.

In Australia, two pastors were found guilty of ''vilifying Muslims'' under the Racial and Religious Tolerance Act, required to publish a statement in several newspapers acknowledging their guilt, and avoid making statements about Muslims and Islam in the future.

In Iran, members of a house church movement were arrested on Dec. 10 by the secret police. Seven men and one woman remain in custody; the authorities instructed church members remaining at liberty not to send news about the arrests to anyone outside the country.

In Iraq, an Evangelical Presbyterian elder was kidnapped and murdered on November 30, just after his body was found, on Dec. 5, Father Samy Abdulahad was kidnapped after leaving his church in Baghdad.

In Egypt, former sheikh Bahaa el-Din Ahmed Hussein el-Akkad was transferred to another prison on Oct. 21, despite his release having been ordered after serving 18 months of provisional detention for ''insulting Islam'' by converting to Christianity.

In Germany, Christian homeschooling mother Katherina Plett was arrested and sentenced to ten days in prison for violating the 1938 Nazi law against homeschooling.

Notabene that, apart from Australia and India (although to the latter I apply the epithet "democratic" only with utter reserve), there are nothing but Islamic, rogue-, pre-democratic and dictatorial states on lil' Mr. Skinhead Hairdo's list.

So let's have a deeper look into the German case:

1. The woman concerned is called Katharina, NOT Katherina. I don't want to appear petty, but mis-spelling names is slovenly, rude and – worse – dumb. Get at least your basic facts right.

2. Germany was the first country in the world to have free elementary education available to all people. This was brought about by the Lutheran Reformation. Remember the translation of the Bible? So that it could be read by everybody literate himself? You do? Good!

Another one of the reasons for compulsory education was that children would get the chance to learn to read and not to be kept home and forced to work. Not a strong argument, admittedly, for an American Libertarian, but we take the liberty to see things a bit differently.

Consequently, compulsory state schooling was set up first in Saxony, where Martin Luther lived and worked. Ernst der Fromme, Duke of Sachsen-Gotha-Altenburg, introduced compulsory school attendance in 1642 and saw that his schools were well equipped (printing of schoolbooks). Other German states followed suit, for example Prussia with the Principia regulativa of Friedrich Wilhelm I. in 1717. Of course, day-by-day realisation was somewhat slower. However, by the end of the 19th century all of Germany, Austria-Hungary, Scandinavia and France had put into practise compulsory school attendance laws.

We are talking here, mind you, about one of the great civilisatory achievements, of which Europe, and specifically Germany, can be justifiedly proud.

3. Katharina Plett wasn't quite the innocent Christian victim of a, dare we uttering that word, secular state, American religious zeal would like her to be.

Fact is, the Pletts (ethnic Germans from Russia) refused to let their children attend a theater performance of König Drosselbart (King Thrushbeard) because they considered it "devil's handiwork" and refused to pay the legally required fine. Coercive detention was the only possible legal consequence. What were the authorities supposed to do? Let them and the other whacko fundies get away with it and hand over the German state school system to Pat Robertson? Closing down the school so as not to anger the, possibly American, backers of the campaign? And a calculated campaign it was, not an individual act of resistance by desperate parents. (Memories of Rosa Parks, you conservatives out there? Can you spell "goose -- gander"?)

Or can you imagine what the reaction of "conservatives" to a similar conduct by Muslims would be?

According to district chief executive Sven-Georg Adenauer (CDU) – a great grandson of first German chancellor and Catholic Konrad Adenauer, by the way – the Pletts had additionally intimidated other students and bullied them with occult allusions and that the teaching at that school was "bewitched".

4. The allusion to "Nazi law" is preposterous.

It is not as if Hitler and his cronies had destroyed a thriving homeschooling infrastructure and it is of scandalous intellectual lack of integrity to suggest it was so! In fact, there WAS no such infrastructure and never had been. The lawmaking process just did what would have been done sooner or later by any German government anyway, namely legally clarifying the status quo. If there was any political intention, it was anti-elitist and if there were people in Germany who were practising homeschooling at that time, it were some of the aristocratic owners of the big estates east of the Elbe, a negligible number altogether, who didn't have their children privately tutored because they mistrusted a not-Christian-enough state school system, but because there were no higher schools available close by or because they didn't fancy sending their children to the village school to rub elbows with the peasants and because they could afford it.

Taking a law, which HAPPENED TO BE passed in Germany between 1933 and 1945 and discredit it as "Nazi" because it covers a cause of which one personally doesn't approve is not an isolated case. It is done by the intellectually dishonest or plain dumb all the time. The banning of hunting the life fox to hounds in 1934 comes to mind as well.

Notabene, the anti-fox-hunting law was prepared already by the administration preceding the Nazis who then passed it. Not to mention the fact that there had never been, very much like homeschooling, much of hunting the life fox to hounds in Germany anyway. Just another case of demagogically tarring something one simply doesn't like with the Nazi brush.

To make it quite clear, I am an ardent supporter of hunting to hounds. I am just embarrassed by having intellectual fraudsters on my side of the issue.

Homeschooling, as much as I'd wish it weren't, is a non-starter in Germany. The fact that people like the Pletts have become champions of it, speaks for itself, as does the fact that the dismal Waldorfschule is among the most successful of the (few -- about 7%) private schools here. As does the fact that the practice to grant German students at university level absolute freedom to choose their own curriculum has led us down to the academic standard of a third-world country. (By the way, private schools are heavily subsidized by the state in Germany.)

Historically, Germany is a nation with one of the proudest scholarly and intellectual traditions worldwide (and that doesn't even take the Ashkenazim Jews into account who contributed so much to it before they were murdered or, if they were lucky, sent packing) precisely because the cause of public education was taken seriously, and the fact that we have dropped well below mediocrity has nothing to do with any lack of homeschooling but with the fact that teachers (state employees and not subject to call almost all of them) have long forgotten that they are supposed to serve the community and not to own it, and are more busy  enjoying their de facto 12 weeks of paid holidays instead performing their teaching obligations. But then, service has become a dirty word in Germany, as have duty and responsibility.

"Conservativism" has many faces.

Obviously, some American "conservatives" are too dumb to understand that and that their own traditions, historical development, understanding of personal freedom and scepticism towards governmental paternalism -- in a word: mentality -- can not be applied offhandedly to other, specifically European, countries. If that were so easy, they'd still be over here.

Just let US GERMANS deal with OUR problems ourselves and next time you say something get a modicum of education and information first.
By The_Editrix At 20:48