Clearly A Case of Self-Defense

The stabbing of a rabbi in Frankfurt/Main almost two weeks ago is old news by now. Old news, too, is that the police arrested a "German of Afghan parentage" as the perpetrator last Thursday.

The 22-year-old admitted to stabbing the rabbi, prosecutors said in a statement. The man is being investigated on suspicion of attempted manslaughter and aggravated battery.

According to the rabbi, the assailant said "I’ll kill you, you Scheiß-Jude." [Expletives are hardly translatable -- Scheiß=shit, Jude=Jew].

Prosecutors said that the suspect -- whose name they did not release -- denies having either, any intention of killing the rabbi or any antisemitic motive.

Of course not. Nobody who rams a 7 1/2-centimetre blade into somebody's abdomen has intention of killing the recipient of this attention. That is true. As true as the suspect's statement that he felt threatened by and physically inferior to the middle-aged, obese rabbi and so reached for his knife. As true as he picked by mere chance a man to attack who was, by his outfit, easily identifiable as Jew. As Henryk M. Broder put it: "Here we have another case of self-defense, where the provocateur leaps aggressively into the provocatee's knife as an answer to a friendly "salam aleikum". 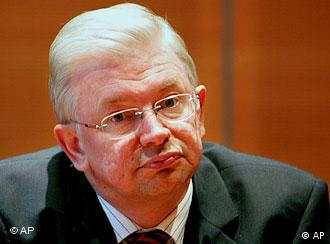 Unable to help themselves either were the usual suspects. German politicians and celebrities spouted the prescribed politically correct dismay-drivel, the total meaninglessness of which was perversely proven by the man who jumped the queue to give words to his somewhat predictable abhorrence. Roland Koch, premier of the state of Hesse, called the attack, not even trying to be original, a "perfidious act that we can only view with horror and indignation and most strongly condemn" and in the shitrag to end all shitrags Bild to boot.

That is the same Roland Koch, mind you, who, at the time when the scandal concerning illegal donations to his "Christian" party, CDU, was unearthed, came under considerable pressure when it expired that the Hesse CDU (of which he is chairman) had for many years kept illegal bank accounts abroad, bank accounts, which had been used to finance Koch's election campaign. The same Roland Koch, who, although it was proven that he had not told the truth both in parliament and in the parliamentary committee of inquiry, did not resign. The same Koch, whose buddy, party treasurer Casimir Prinz zu Sayn-Wittgenstein (noblesse oblige!), had the temerity to concoct the perverse (and false) claim that the money came from "expatriate Jewish emigrants". The same Roland Koch who later compared the identification by name of wealthy citizens for a special inheritance tax to the yellow star Jews were made to wear by the Nazis.

The same Koch whose career none of those things harmed.

Back to our German with Afghan parentage perpetrator. It lately expired that, not earlier than in January, that very man had been arrested and "cautioned" by the Frankfurt-Höchst juvenile court (at 21 or 22!) and got a whopping juvenile custodial sentence of two weeks for aggravated battery, intimidation and criminal damage. In May he got a penalty order for 600 Euro because of bodily injury and intimidation.

He was then convicted by a local court because he had demolished an elevator in the house where he lived. When the caretaker asked him to pay for the repair he shot at the man four times with an alarm gun and wounded him in the face. Next day, he threatened two neighbours with a knife, informing them in the process, presumably to give more clout to his threats, that he had killed another neighbour just the day before.

In May he was convicted because of an assault in a bus. He socked a man in the face because he (the man) had kindly asked him to let him pass. When the bus driver tried to call the police and refused to open the door, he threatened him (the bus driver) with a knife saying: "I'll cut your throat" (or words to that effect). He then opened the door by force and escaped.

That was, so the report from the "conservative" FAZ informs us ultra-conscientiously, "according to the judge's opinion". And who knows, maybe it's really not true.

Whether the FAZ hacks couldn't believe that a man who had REALLY done all that was set free again and again by several German courts, or whether they were just scared shitless is anybody's guess.