How does one improve one's relationships with the Jews? Let me count the ways...

Via VFR (here and here) I was made aware of a review of Ridley Scott's "Kingdom of Heaven" (I haven't seen it and it is not the subject of this entry) at NRO that includes a telling chracterization of the late pope John Paul II.

In the light of the recent anti-Catholic hate-feast triggered off by the fact that Pope Benedict revoked the excommunication of a Catholic rehabilitated a bishop and Holocaust denier (we discussed it here, here and here) it became apparent how much better his predecessor John Paul II was received, specifically by those who had reason to prove that they are "not biased" towards the Catholic faith, eerily reminiscent of all those antisemites who are quoting their many "Jewish friends", so this dated bit about the Polish pope caught my attention:

So much has changed and so much has stayed the same since that era. Nations still go to war over the region and tensions never seem to relax in the Holy Land. On another level, however, I was reminded how different things have become. The screening I attended of Kingdom of Heaven was shown on the night before the funeral for Pope John Paul II.

In May of 2001, he became the first leader of the Catholic Church to set foot inside a mosque. Although no one doubted his profound theological differences with Islam, the pope visited the Ummayad Mosque — one of the oldest mosques in the world — in Damascus, Syria. The site holds special significance to both Muslims and Christians because it is believed to contain the tomb of John the Baptist (Prophet Yahya to Muslims).

While in Damascus, Pope John Paul II said, "It is my ardent hope that Muslim and Christian religious leaders will present our two great religious communities in respectful dialogue, never more as communities in conflict."

Isn't it obvious how different the message of John Paul II is from that of the German pope with the Nazi past?

Yes, but not in the way most people choose to see it.

The Polish pope was much lauded for his efforts to improve Catholic-Jewish relationships. What did he actually do? How DOES one improve one's relationships with the Jews? Let me count the ways:

One of his first trips abroad was to Turkey, a nominally secular but in fact overwhelmingly Muslim country. That was in 1979. In a talk to the Turkish Catholics he demanded respect for the religious and moral values of Islam, so critically endangered to be daunted by Catholic influence. In Istanbul he visited Hagia Sophia, one of the greatest churches in the world under the Byzantine Empire, stolen by Islam, used as a mosque during the Ottoman Empire, now a museum, which was, no doubt, seen as a symbolic act. The first of many more to follow.

In 1985 he visited Morocco at the invitation of King Hassan II and became thus the first pope to visit an Islamic country at the invitation of its religious leader. At a historic meeting with thousands of Muslim youths in Casablanca Stadium, he emphasized that "we believe in the same God, the one God, the living God", as indeed any nice little dhimmi would.

During a trip to Egypt in 2000, the pope met Islamic clerics of Cairo's al-Azhar University, which expanded the Official Catholic-Muslim dialogue. In 2001, as mentioned above, John Paul II became the first pope to enter a Muslim place of worship when he visited the Umayyad mosque in Damascus. He paused to pray at a memorial to St. John the Baptist inside the mosque in an event that was televised around much of the Muslim world, which was not all that amazing because, to Muslims, it was another clear gesture of submission. In 2003 Pope John Paul II took further steps to improve Catholic relationships with the Jews and criticized Israel for building a barrier in the West Bank, saying the Middle East "does not need walls but bridges", which safely equalled "Middle East" with "killing Jews" and nobody noticed, not even the pope himself. "The construction of the wall between the Israeli people and the Palestinian people is seen by many as a new obstacle on the road leading to peaceful cohabitation," he said and nobody laughed. 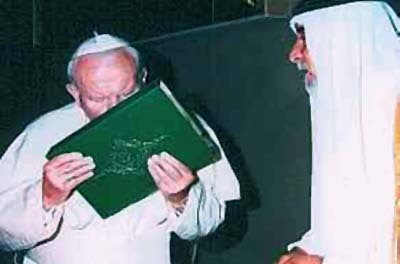 Not that his devotion to Islam was uncritical. Visiting Muslim-dominated places like Sudan, the pope publicly called for mutual respect for religious freedom, which must have been of great comfort for the many Christians while they were hacked to small pieces with big knifes by all those peaceful Muslims just out for a dialogue.

The slaying of a bishop and missionaries in Algeria prompted the pope to -- you've guessed it -- denounce all those who would kill in the name of God, without further asking who else but Muslims are still in the habit of killing in the name of -- their -- God.

In his criticism of the Iraq war, Johannes Paul met the Zeitgeist again right between the eyes and for that some even forgave him that he wasn't -- yet and just -- prepared to hand over the Catholic Church to self-abandon by supporting faddish (and deeply wrong) innovations like, say, allowing women into the priesthood, for which he was either hailed or reviled as "conservative" and a "traditionalist". And those few who really didn't like him blamed Cardinal Ratzinger for it anyway.

Yes, he held that great speech at Yad Vashem but in the light of the above I'm inclined to cynically quote Mandy Rice-Davies here: "But he WOULD say that, wouldn't he?"

And now we have the lonely old man in the Vatican, so far removed from any Zeitgeist, seemingly cold, restrained, frail, without the warmth and the vigorous physique of his predecessor and carrying the crippling burden of being German, a burden, which would have broken a lesser man long ago. We remember his touching visit of Auschwitz, his refusal to further apologize for the crusades, his open words to Polish Catholics, his... his... his... It was either never enough or too much already.

For me, too, it wasn't always enough what Pope Benedict did. I too, was disappointed at times. But I think, too, that it was, and specifically for a German, a courageous thing to do to allow, against all modish trends, a Catholic back into the fold of the church for theological reasons that had nothing to do with this Catholics demented views of the Holocaust. If a murderer is not excommunicated, why should a Holocaust denier? This issue will, as my friend the sage from Texas put it, define whether or not the pope can function independently or if he must give in to the opinions of the politically correct atheists who so use the Holocaust to further their agenda, and an agenda it is. Here we have exactly the same people swooning over death-cult-Islam appeaser John Paul II who are denouncing Benedict for "rehabilitating a Holocaust denier". And she goes on:

Holy Father has already taken much abuse for simply being German. How I wish the real victims of the Holocaust could put in their opinions vis-a-vis those who use them for political gain. Not all those who call themselves "Jews" feel affection or affiliation with the victims, but they certainly do exploit them. I wish, and not for the first time, that those people could rise from the grave to avenge themselves not only on their murderers but upon those who see them as an opportunity. We might be surprised at what was revealed.

Moshea, my friend from Texas, a devout Catholic, was the first American to speak to me favourably about the concept of monarchy. I hope we can make her come back and share some of her thoughts.

Oh yes, and thank you!

Well, I think you have seen how it turned out, now. There was no need to worry - the Pope is made of tougher stuff than people realize. I wrote so almost as soon as he was enthroned - http://fpb.livejournal.com/120127.html - and it turned out to be one of my better predictions. But then, I had known people like him before, and recognized the type as soon as I was able to have a look at him. You don't ever need to worry about someone like him backing down if he ever has set out in one direction.