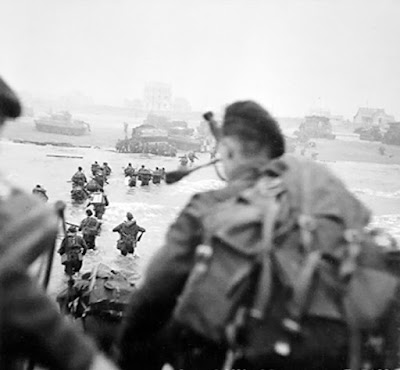 Pipers had traditionally led Scottish troops into battle, but the death toll in World War I had been so high that the practice was banned by the British high command. However, Lord Lovat (above in 1942) asked Bill Millin, then 21, to ignore instructions and to pipe the Commandos ashore at Sword Beach. Wearing his kilt and armed only with his bagpipes, Bill marched up and down the shore playing "Hielan' Laddie" and "The Road to the Isles" as his comrades fell around him. German snipers later attested, they did not target Millin because they believed him to be mad.


The action was portrayed in the 1962 film "The Longest Day". The actor playing Millin was Pipe Major Leslie de Laspee, the official piper to Her Majesty The Queen Mother in 1961.

Edited to add: Here is Piper Bill's personal account of D-Day. My thanks go to O’Gallchubhair.
By The_Editrix At 14:19

Er... the link to Bill Millin's story could do with truncating.
It appears to be Two url's joined and run into one big messy one:-

Should perhaps be shortened to:
http://www.pegasusarchive.org/normandy/bill_millin.htm

Thanks for the hint! Done!