Dhimmi Without A Cause

In the previous entry I stated that the main issue about the Joanie de Rijkes of this world is not that they are dhimmis who gladly surrender to the powers out to destroy the West. Most of them do, but that is not the core of the problem. The more intelligent of this type of abandoned woman may as well turn out as an avid Islam-critic, as Fallaci did, but then, intelligence is a rare commodity.

Early in 2006, the case of the archaeologist Susanne Osthoff, who was kidnapped in Iraq, made headlines in Germany. This, this and this entry may serve as a reminder. I suddenly recalled Osthoff, when a commenter at VFR drew a (fatuous) analogy between Joanie de Rijke and Joan of Arc and I remembered that Osthoff, another one of those abandoned woman in need of a thrill, was compared to the French virgin saint as well. I wrote in 2006:

Thanks to Davids Medienkritik for ... the following gem: 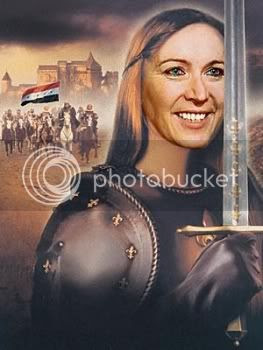 Yes, that's right! The (leftwing) Süddeutsche Zeitung shows Ms. "Embarrassment Personified" Osthoff clad as Joan of Arc! A woman with intimate ties to the Saddam "Plasticshredder" Hussein regime, a convert to Islam. As Joan of Arc. A Christian saint.

I wonder what makes people compare undutiful middle-aged crones out for a titillating experience to a teenage virgin out on a sacred mission and can only presume that it's utter lack of ethical and cultural discernment, but that isn't the point here anyway. 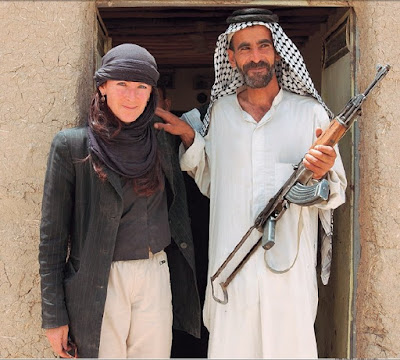 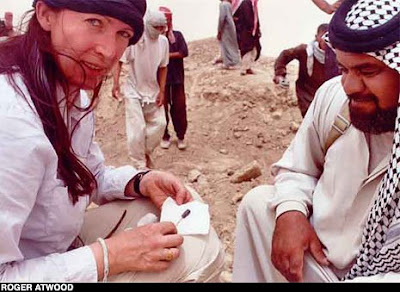 The point is, to me, that it is not dhimmitude, but the typical female self-centeredness, vanity and irresponsibility that often, not always, leads to dhimmitude and which is, in every single one of its manifestations, so destructive to society. In Susanne Osthoff it becomes particularly obvious, or is it just me who sees a woman who just adores posing in sexually ambiguous clothes, "protected" by noble savages, putting herself in harm's way by being at places where she had no business to be. Osthoff, who dumped her child at a boarding school when she ought to have looked after it herself, Osthoff who married an Arab (albeit not for long), Osthoff, who could have worked in a field of archaeology more appropriate for a woman, say, in Sweden, and if I were a cynic I'd say now that even there is a fair probability of being raped by a Muslim. Osthoff, who could have refrained from embarking on such a non-career at all, but searched for the stability of family life she so pooh-poohed.

But this woman is, of course, only interesting because she is such an obvious paragon of deliquency and because there are countless others like her, happily undermining the core values of our culture.

At the high end it's Princess Diana strutting around in dungarees against landmines because even being married to the heir to the throne of England couldn't satisfy her craving for attention, and at the low end it's those perverts who marry death row inmates, with the Fallacis, Osthoffs and de Rijkes somewhere in between. A "cause", however ill-fated, lost and destructive (or even good), has none of them. Unfair to dhimmis!
By The_Editrix At 10:11