The repercussions for all of Germany following the murder of a 31-year old Muslim woman from Egypt by a passport-German from Russia in a German courtroom are remarkable and dramatic and remarkably dramatic. All honour killings and other crimes within the Muslim counter-culture, all killings, mutilations and beatings-up of Germans by our Muslim "culture enrichers" are, as far as they got any attention at all, forgotten. They were "isolated cases" anway, whereas for this, really isolated, case all Germans are held responsible, a crime committed by a man who wasn't even socialised within the evil "islamophobic" German culture.

Indeed, the media echo is stunning. A quick Google-search just for the name of the victim reveals amazing results. "Martyr", "headscarf" and "pregnant" are the feeds that mainly catch the eye. Of course, the German results are almost identical, with the German equivalents of "hate crime" and "racism" thrown in.

All of Germany is wallowing orgasmically, like swine wallow in dirt, in their own moral squalor. They love that. 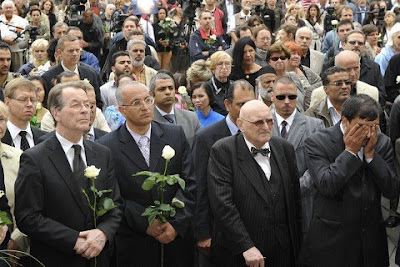 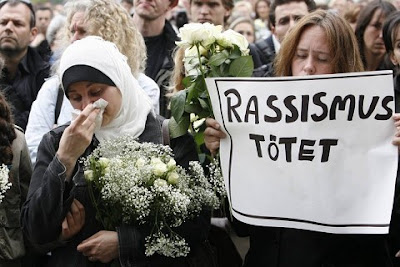 And moral squalor it is indeed, just not in the way they see it.

The French Figaro, so Gudrun Eussner informs me, quotes in today's print issue on page 7 the same Aiman Mazyek who states that "total (sic!) religious freedom" must be defended, part of which is the wearing of the headscarf:..."liberté réligieuse totale, dont fait partie le port du voile."

Has anybody still any doubt that we in the West are in a total (sic!) and global war with Islam?

Even such experts on human rights like Mahmud Ahmadinejad and the Iranian Supreme Council of Cultural Revolution (SCCR) chimed in, the latter issuing a statement saying the murder of Marwa al-Sherbini in Germany demonstrated the West’s disrespect to human rights. 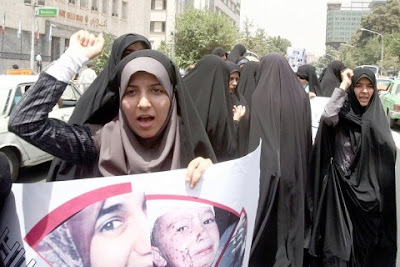 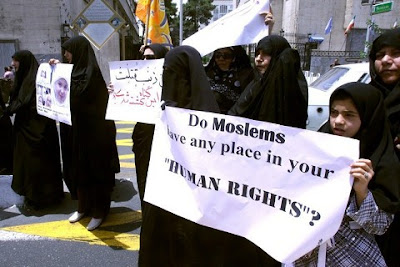 The most revealing aspect was, however, that even such an obscene extravaganza of German self-hatred and submission wasn't enough for the trailblazing whips (or rather: "whippettes") of dhimmitude. Andrea Dernbach, who has proven her ethical depth and moral prowess already by a justification of sex with children to clear Islam of the suspicion of homophobia, asked under the header "Germany's new hatred": "Why does the death of a woman wearing a headscarf – who wasn’t the victim of a so-called “honour killing” – spark so little interest in Germany?"

So far, so bad, but lately we seem even to export that specific brand of Islam-adoring journalettes, maybe because whatever Germans do, they do thoroughly. And indeed, under the even more incredible header "A murder that Germany ignored" a woman with a German-sounding name whines (in the Al Guardian, no less!) about what must be, I don't have any other explanation, the figment of an oestrogen-addled brain, and doesn't even shy away from repeating an outlandish, preposterous accusation from the Muslim media:

They [the German media] could have asked – as an Egyptian did – why Marwa's husband, while he was trying to help his wife, was shot and wounded by a policeman in the courtroom. Because he was not blond-haired?

I am not a prolific letter-to-the-editor-writer, but this time I couldn't help myself:

Your name suggests that you can read German. So you either have an agenda or you are out of your mind. The German media is, since that crime happened, in an orgiastic, self-hating frenzy. "Germans! She died for your sins!" And you are SERIOUSLY selling the above drivel to an unsuspecting Guardian readership? The day the countless ethnic Germans who are beaten to a pulp or killed by our Muslim culture enrichers get at least a fifth of the media attention this case got and it still getting, I will stop worrying what makes people like you tick.

Elsewhere, in Iran, the 31-year-old mother of two, Mohabat Mahmodi, will be executed within the next couple of days, because she killed her rapist in self-defense.*

And nobody cares. They are all too busy being outraged by German islamophobia.

*Information from an email by Mina Ahadi, exile-Iranian and secretary of the Central Council of Ex-Muslims in Germany.
By The_Editrix At 19:53

Even such experts on human rights like Mahmud Ahmadinejad and the Iranian Supreme Council of Cultural Revolution (SCCR) chimed in, the latter issuing a statement saying the murder of Marwa al-Sherbini in Germany demonstrated the West’s disrespect to human rights.

Good God. As a Jew, I say give me Germany over Islam any day. What was a horrible aberration in Germany's history is the whole of Muslim history.

If Germany becomes a threat to Jews again, it will be because of Muslim immigrants, not because of "Aryans".

Cassandra, it's a bit more involved than that. Germany's way to the Holocaust was not a freak of history. In his epochal book "Ideology of Death. Why the Holocaust happend in Germany" John Weiss (a gentile, by the way) bursts that bubble.

"The Holocaust happened in Germany, historian Weiss argues, because "the special nature of German and Austrian history" gave an utterly racist form of anti-Semitism "immense power." Weiss examines anti-Semitism's "Christian legacy" in Europe; the role of Martin Luther; the weakness of countervailing Enlightenment ideas in Germany and Austria-Hungary; and the central fact that, throughout the nineteenth and early twentieth centuries, "racism was increasingly used by upper-class reactionaries, middle-class nationalists, and lower-class populists as a weapon against the growing influence of democratic liberalism, economic modernization, and calls for social reform." Weiss reviews the rise of the Nazi movement and its fuhrer, Hitler's relationships with German elites, German (and Austrian) involvement with the death camps, and the postwar efforts of many German leaders (often with Allied support) to hide their prewar racial attitudes." (From a Booklist review at Amazon.)

If you search for the word "Mufti" in this blog, you will find accounts of the atrocious cooperation between Nazis and Muslims during the "thousand years" between 1933 and 1945. Hitler and the Nazis were not averse to all "Semites". In fact, I think that the preemptive servitude of Germans we are currently experiencing is based, consciously or subconsciously, on the hope that Muslims will finish what the Americans stopped them to do in 1945, while they are keeping up appearances of being "good" and having really really "learned from their past".

Antisemitism aside for a moment, there is no indication that Germans are in any way more racist than any other white people. The African-Germans from Germany's modest colonial past, few as they were, were never harmed even by the Nazis and even the "Rhineland bastards" were sterilized, not killed. The tale that Hitler refused to greet Jesse Owens is a political correct lie. Owens was well received at the 1936 Olympics.

I am not saying anything nice about Hitler or Nazi-Germany here, I am stating facts. The "white race" was not really a concern, it was a rhetoric bubble. The core of the Nazi ideology was hatred of Jews and that had reasons far beyond "race". "Race" was just a rationalisation of something much deeper. This goes still on today. Auschwitz and what it stands for has worsened German Antisemitism, not lessened it.

And you know, despite having read piles of books about Nazism, your blog was the first I heard about Mufti.

In fact, I think that the preemptive servitude of Germans we are currently experiencing is based, consciously or subconsciously, on the hope that Muslims will finish what the Americans stopped them to do in 1945, while they are keeping up appearances of being "good" and having really really "learned from their past".

Unfortunately, when I heard some of the rabidly anti-American sentiment from Europe in the couple of years after 9/11, I had similar thoughts. Especially since a lot of the things I heard Europeans (not just Germans) saying about Americans were strikingly similar to Nazi propaganda about Jews.

Lets talk about a different approach on the situation.

I do not know if the works of Prof Alvin Schmidt are available in Germany or have been translated. I suspect they have not been.

Schmidt traces the development of what we call Western Civ and shows how it flows from Christian ethos. A religion that is submission based would by its nature be more prone to totalitarianism.

Christianity has the division of Church and state and has all authority subject to standards of justice. This is opposed to a top down system drenched in totalitarianism.

It is good to see familiar names. I feel very much at home here. The spirit of knowledge and old friends that are missed fills the place.

Thanks for pointing me at Prof. Schmidt, Beak. I'll check him out now.

"And you know, despite having read piles of books about Nazism, your blog was the first I heard about Mufti."

Probably because the majority of books and documentaries about the war have focused primarily on the battlefield aspects of the war. Even many of the productions (at least those I've seen) about the Holocaust have focused more on the conditions in the camps or individual stories of heroism in that horrid situation. There are studies that have delved into the politics, psychology and spirituality involved. However they've been pretty low profile as far as "popular" media goes.

Another example, most people don't realize what kind of influence the Nazis held in South America. I watched a film of goose stepping troops which I assumed marching past the Brandenburg gate. It turned out they were Argentine troops in Buenos Aires. Hitler's Secret War in South America 1939-1945 by Stanley E. Hinton demonstrates how shockingly influential the Nazis were. Before 1939, they supplied military hardware and uniforms to many SA nations. A lot of espionage and counterespionage went on in there too. Many of the nations "broke relations" with Germany after the declaration of war on December 11, 1945, but did not declare war on Germany or become active participants even if they did. Brazil did so more than others, and lost some ships to U-boats. Argentina did not declare war on Germany until March of 45, when the end was painfully obvious to the blind.

Yes, the Mufti and the Nazi connection to Islam was overlooked or ignored or kept to the shadows of the history books.