An Antisemite Doesn't Hate What a Jew Does, He Hates His Existence

I got an interesting comment by email from a co-blogger who goes by the self-effacing name "Genius" and who dislikes registering, so here it is:

Excellent post. I'm glad to see someone writing sanely about this topic.

I find Marr to have been a little imprecise and think it's important for us to dwell on the term anti-semitism (or however you wish to conceive it by its spelling) until we get to an understanding of what semitism is. I did that and came to the conclusion that, by "semitism," Marr meant Jewish assimilation, and that this is what anti-semites really opposed and continue to oppose. The fixation on race was simply their tool for opposing Jewish assimilation and, ultimately, emancipation.

Unlike you, I make a clear distinction between anti-semitism and anti-zionism (I am a Jew and a Zionist who made Aliyah, by the way), though I am most interested in expressions of the former in the latter and ways that different ideas about Judaism, Jewish emancipation/assimilation and Zionism all seep into the opposition to each. For example, how is it that you see very early and even ahistorical expressions of anti-semitism in the Book of Esther and in 16th century Spain, and also in rejection of Israel, which should by logic be western anti-semites' dream to empty the western world of Jews?

I also looked around for an all-encompassing term for opposition to Jews, Judaism, Jewishness and Jewish nationalism, and I settled on the term Judenhass because it sounds a little more neutral to English-speakers than Jew-hatred and because terms like Judenstadt were meant to evoke it.

First I don't think Marr objected specifically to Jewish assimilation. His definition of Jews as the target of his animosity was unmistakably racial. In his writings he shows another typical trait of the antisemite, namely the firm belief that he has nothing against Jews, but that THEY have something against HIM. That is one of the core topoi of antisemitism. He wanted the Jews to go away, one way or the other, assimilated or not.

Of course, early anti-Zionism wasn't necessarily antisemitic. However, the Holocaust and the existence of a Judenstaat has changed that. Today the arguments against Israel mirror those against Jews and, of course, nobody has anything against Israel, it is Israel that is hateful towards others. There still is no LOGICAL equation between antisemitism and anti-Zionism, but contemporary APPLIED anti-Zionism is nothing but plain old antisemitism in disguise. Just a fact. Never expect Jew haters, antisemites, whatever, to be logical. It used to be "Jews out TO Plalestine" in Germany, now it's "Jews out OF Palestine". So there!

A bit off topic: I looked for a translation of Wilhelm Marr's pamphlet and found one at Mr. Kevin "Squeaky Clean" MacDonald's website. The translator is a Dr. Gerhard Rohringer, a retired doctor from Santa Barbara, California, born in Linz, Austria, a Holocaust relativist/denier and prolific letter writer to David Irving. (No links for obvious reasons. It can be easily retrieved via a Google search.) Birds of a feather and all that.

At the end of the day, it doesn't matter what one calls it. If you find Judenhass more apropos than Jew-hatred, it is because German isn't your native language. Words from a foreign language don't touch one emotionally. For example, I can freely cuss and swear in English and use words I'd never use in my native German because I grasp the vulgarity not emotionally. I know on an intellectual level that the English word "shit" is vulgar, but I was taught from an early age that the German equivalent "Scheiße" is an absolute no no, I sensed my mother's anger about such a word when I was little, so the objection to it is deeply ingrained in my mind.

There is an interesting and multi-faceted debate going on at Lawrence Auster's VFR about antisemitism and what makes one an antisemite. It made me picking my brain for a concise definition. What makes "antisemitism" different from assorted prejudices, whether veryfiable of falsifyable, or from a phenomenon like racism.

First, I think what we are dealing here with ought to be spelled "antisemitism" and not "anti-Semitism". There really is no "Semitism". Although there is an entry listed at Merriam-Webster ...

Sem·i·tism
Pronunciation: \ˈse-mə-ˌti-zəm\
Function: noun
Date: 1851
1 a : Semitic character or qualities b : a characteristic feature of a Semitic language occurring in another language
2 : policy or predisposition favorable to Jews

... it doesn't make for a justification of the current majority-spelling. First, according to Merriam-Webster, the word isn't much older than the German "Antisemitismus", which was coined by the writer and confessing Jew hater Wilhelm Marr 1879 in his pamphlet "Der Weg zum Siege des Germanenthums über das Judenthum – Vom nichtconfessionellen Standpunkt aus betrachtet" ("The Path to Victory of Germanicism over Judaism -- from a Non-Religious Point view") who thus became the doyen of political antisemitsm of Wilhelmine Germany. Also, I have never heard or seen the term "Semitism" in actual usage and while there is a theoretical possibility that "Semitism", in the sense of the number 1 definition, may have been used, I can not imagine that it was, is or will be ever used in the meaning listed under 2. The possible German equivalent "Semitismus" isn't listed in the German Duden at all. It doesn't go together with Marr's intentions as well. He introduced this, until then non-existing, phrase explicitly as an alternative to the religious-Christian anti-Judaism (sic!) to make the ostracism of the Jews plausible to all German gentiles, religious or not. Thus, "improvement" by baptism was excluded, and specifically assimilated Jews were targeted as "artfremd". This very specific and so far unique definition Marr's antisemitism implies is another reason to stay as close to the original German term as possible.

Now what IS antisemitism when it is stripped from the pseudo-scientific lingo with which Marr masked it? First and foremost, antisemitism is not a prejudice, but a resentment.

Prejudice is aimed at people's behaviour, resentment at their existence.

An antisemite doesn't dislike what a Jew does or how he is, he dislikes his existence. The antisemit reacts with scorn to assimilation as well as to distinction. Rich Jews are exploiters, poor Jews leeches, clever Jews are arrogant, dumb Jews a disgrace for the Jewish race, they are responsible for capitalism and for communism, for internationalism, and now they've got their own brand of nationalism, it is vilified with a passion. The antisemite resents everything about the Jew and the opposite as well. In contrast, racism is targeted at the, real or perceived, flaws of people of a certain race. Only in a very few, very extreme cases it is aimed at the very existence of all people of a race.

Antisemitism is no constant. Like all social phenomena, antisemitism is subject to change. Poverty, too, isn't anymore what it used to be at the times of Charles Dickens. Modern antisemitism isn't strutting around in boondockers anymore, yelling "Death to the Jews". Instead, it mourns the Holocaust victims and is asking at the same time why the survivors haven't learned anything from their past, so that they now subject another people to the same fate. The modern antisemite doesn't believe in the "Protocols", instead, he is hallucinating about the "Israel lobby" that rules American politics. Of course, he commemorates every year on January 27 the liberation of Auschwitz and demands at the same time that Iran has a right to have nuclear weapons. He reverts cause and effect and states that the nuclear threat emanates from Israel, not from Iran. Once again, it's the Jew's (the über-Jew Israel's) own fault if he is hated. The modern antisemite abhors vulgar antisemitism, but is quite unselfconsciously anti-Zionist (sic!) and grateful to be able to live out his antisemitism in a politically correct way. However, anti-Zionism is as much a resentment as good old antisemitism is. It aims not at anything Israel does or leaves, it targets her existence. Therefore, he is so passionate about a "solution of the Palestine question" which would be, for Israel, a final solution. What happens in Darfur, Zimbabwe, Tibet or Kongo or anywhere else, where neither the über-Jew Israel or the ersatz-Jew America, is involved doesn't matter to him.

At the time of Wilhelm Marr, Austria's Karl Lueger or court chaplain Adolf Stoecker everybody was unabasedly antisemitic. There were Jews, there were antisemites, and there was antisemitism. Following the war, we had, at least in Germany, antisemitism without Jews. And now we have antisemitism without antisemites. It's called anti-Zionism. Anti-Zionists criticize Israel not for what she does, it denies her the right to exist, just what the good old antisemites did to the Jews. 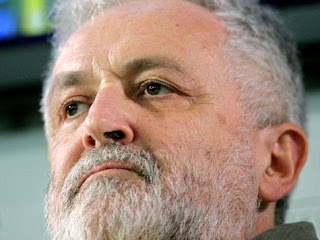 The above may have a strong focus on Germany, but I think in essence it applies to the entire West, America included, as well. For this, I have paraphrased and translated parts of a speech "Der Antisemitismus in seinem neuen Gewand" (something like "Antisemitism's new Clothes") given by the writer Henryk M. Broder, invited as an expert, to the Committee on Internal Affairs of the German Bundestag in July 2008.

Henryk M. Broder, born 1946, is the son of two Holocaust survivors. His epochal book "Der ewige Antisemit: Über Sinn und Funktion eines beständigen Gefühls" (something like: "The Eternal Antisemite: Meaning and Purpose of an Everlasting Sentiment"), marked a new milestone because it famously and firstly thematized the antisemitism of the Left. In Germany, it was akin to a palace revolution. For those strapped for time, it will replace entire libraries about that phenomenon.

A major part of Broder's writing is targeted at antisemitism and anti-Americanism (antiamericanism?).
By The_Editrix At 12:28

I always learn a lot reading your blog, especially from your posts on anti-zionism and antisemitism. It doesn't seem as though Henryk Broder's books or articles are translated into English. Too bad. I'd be buying a copy now.

Thanks for the kind words, Bruce. There is an anthology of some of his essays translated into English. See here. It's not listed by Amazon anymore. He is difficult to translate, though, because his writing is so utterly idiosyncratic. The wit and the sarcasm doesn't come really across in translation.

Dr.G.Rohringer, a Holocaust relativist/denier, who translated Marr´s pamphlet had died in July 2011 in Santa Barbara.

One should know, that his grandfather was a jew, who has been in a KZ and was murdered by the nazis.

I am ashamed of my brother.
Christa S., born C. Rohringer.

Thank you for your frankness, Christa. How very sad. Unfortunately, being Jewish or having Jewish roots does not keep one from being an Antisemite. Your comment is much appreciated.

Preparing for lightning bolts from a friend I respect.

A certain degree of the hatred is populism. What makes anti semitism unique is the total obsession that in a coherent observation is seriously close to insanity.

If you get a chance, I need a favor.If you run into any articles on the small Yezidi community in Munich let me know.

We are doing a small discussion of Lit. I would be interested in your perspective on things.