Commandment 1 - 10: "Thou Shalt Not Hurt Muslims" ... and specifically not with the truth. 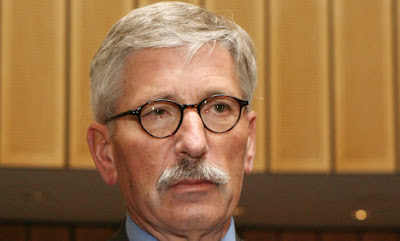 A leading member of Germany’s federal bank (Bundesbank) and former finance minister for Berlin, has caused "outrage" by speaking the truth.

Thilo Sarrazin (65) holds a doctorate of economics from Bonn University, in 1975, he began working in the Federal Ministry of Finance, until 1981 he served as Head of Unit in the Ministry of Labour and Social Affairs, 1981 he returned to the Federal Ministry of Finance. From October 1981 he served as bureau chief and was a close collaborator of then Federal Finance Minister Hans Matthöfer and his successor Manfred Lahnstein. Even after the end of the socialdemocratic-liberal coalition in October 1982, Sarrazin remained in the Finance Ministry, where he became director of several units, including (from 1989 to 1990) the "Innerdeutsche Beziehungen" (inner-German relationships) unit, from where the German monetary, economic and social union was kicked off. From 1990 to 1991 Sarrazin worked for the Treuhand. Then he was up to 1997 State Secretary in the Ministry of Finance in Rhineland-Palatinate. Subsequently, he was chief executive of TLG Immobilien, a Treuhand successor, before he became finance minister in Berlin. He is still a member of the Social Democrats (SPD).

A heavyweight by any other name.

Now he has written a book titled "Deutschland schafft sich ab: Wie wir unser Land aufs Spiel setzen" -- "Germany Does away/Abolishes Itself: How we Jeopardize Our Country". His concern is that immigrants who do not integrate are undermining German identity.

The thrust of the book is particularly aimed at -- who would have thought so -- Muslims. Sarrazin points out that only 3% of men of Turkish origin and only 8% of women of Turkish origin marry Germans. This compares badly with other groups, he says. He says that in Berlin 20% of all acts of violence are carried out by only 1,000 Turkish and Arab youths; a population group that makes up only 0.03% of the actual population in Berlin.

"I don’t want the country of my grandchildren and forefathers to be in broad swathes Muslim, where Turkish and Arabic is widely spoken, where women wear headscarves and where the daily rhythm of life is set by the call of the muezzin", Sarrazin wrote in an extract published in Der Spiegel on August 22.

He says of Islam that "with no other religion is there such a fluid connection between violence, dictatorship and terrorism as there is with Islam". He says "boys are taught an exaggerated idea of the readiness to be violent... for the sake of honour you must take the role all the more seriously the less successful you are in the school system". He says that Muslim immigrants are "unwilling or incapable of integrating into Western society". He says that Germany is on the road to ruin because of the influx of immigrants from the Middle East which would overwhelm the indigenous population and create a nation of ‘dunces’. He says that in particular Muslims are failing to integrate. He says that this has been going on virtually since the war since when the birthrate of native Germans has been steadily falling. He says that the result has been a "dramatic fall" in literacy and numeracy. He says, too, that "Germany is becoming more stupid".

All that is true.

The reactions are stunning, but not amazing.

Kenan Kolat, a leading member of the Turkish community, who thinks that the Turkish genocide of the Armenians ought not to be taught in schools becaus this would put "psychological pressure" on Turkish pupils and will endanger "national peace" (sic!), and who, notabene, prefers the word "participation" to "integration", labelled Sarrazin's stance "pure racism" and called on the Bundesbank to sack him. "This man is trying to reduce the problem (of integration) to the ethnic origin of people and is then vilifying them on that basis". Well on what else? We don't have major problems with other immigrants.

The Central Council of Muslims (shrewdly named after the "Central Council of Jews" to give it credibility it doesn't possess) called him "the embodiment of an ugly German" and its speaker Aiman Mazyek "a Nazi in pinstripes", something of which nobody would accuse Mr. Mazyek (below left). 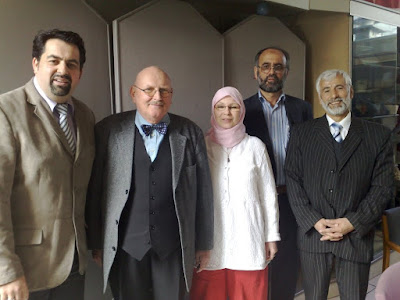 Siemens boss Peter Loescher (not in this picture -- yet and just), stated with refreshing honesty that Sarrazin's comments "are damaging the international reputation of Germany as a business location". Yes, Germans really get that democracy and free speech thingy. It must be in their genes.

But it gets better. In a newspaper interview about his book Sarrazin said that "all Jews share a gene", which accounts for their higher intelligence. While this true as well, to Germans, that's even a bigger howler than accusing Muslims not to integrate. What a wonderful opportunity to show "how much we have learned from our past". The mob devours Sarrazin. Calling for the burning of his book will be the logical next step.

German’s Jewish community reacted with scorn and horror and accused Sarrazin of -- you've guessed it -- antisemitism and of calling for racial profiling. "Whoever tries to define Jews by their genetic make up succumbs to racism", so Stephan Kramer, secretary of the Central Council of Jews in Germany, and a convert to Judaism from the people of perpetrators. Kramer's general record gives reason for the question whether he was planted as an agent provocateur to give Jews a bad name.

Germany’s openly homosexual Vice-(pun intended)-Chancellor and Foreign Minister Guido Westerwelle who is, somewhat understandibly, wildly into politically correct causes, accused the banker of hate speech and, given his intellectual capacities, I wonder how long it took him to come up with something quite that original. He thinks, too, that remarks that feed racism or even (sic!) antisemitism have no place in our political discourse. And all that in an interview with the smutty weekly "Bild am Sonntag", no less.

German Chancellor Angela Merkel condemned Sarrazin for making "stupid and pointless" statements. His book, she said, isn't "helpful", as if her job was to issue book reviews and even before the book was on the market. She said, too, that the Bundesbank should discuss dismissing him, which is none of her business either. A spokesman for the Bundesbank said in an e-mail statement, that the book is Sarrazin’s "private affair" and the opinions he expresses are unrelated to his work, something Merkel, who holds a doctorate in physics, is obviously too dumb to twig.

Meanwhile, the assorted Chamber of Horrors exhibits crawled out from under their stones. Professor Wolfgang Benz, a discredited but nonetheless, or rather therefore, terrifically successful "antisemitism researcher", called Sarrazin's theses -- surely you've guessed this as well -- racist and himself a squaller, lout and somebody who caters for the bowel-movements of the social majority. Well yes. Now we know at least what the "antisemitism researcher" thinks of democracy. Likewise, ex-bishopette Margot "Boozebitch" Kässmann, who is treated by the public and the media as if she had (almost) died for our sins and not driven her official car pissed as a newt through a German city, showed even more powerful creativity by calling Sarrazin "dehumanizing". Burp!

Media personality Michel Friedman who had fallen even deeper than fun-loving boozette Kässmann through an affair involving cocain usage and forced prostitutes from Eastern Europe, has as well long ago made a triumphant comeback because German television, shallow and whorish as it is, allowed it. Friedman, now heavily married and a family man, obviously needed, after his vocal condemnation of Pope Benedict in 2009, another whipping boy to attract what he loves most: attention. "We need bridge builders in Germany, not hate preachers." Well, yes, whatever.

Aygül Özkan, that insufferable simpering fool they made "minister for integration" in the state of Lower Saxony (that's the one who had nothing better to do than to discuss the removal of crucifixes from classrooms before she was even sworn in, to later fail with an attempt at curbing the freedom of the press) accused Thilo Sarrazin, and, too, in smutty "Bild am Sonntag", of "malice" and to "hurt migrants". While, say, pedophilia has become a venial sin as long as it's not a Catholic priest who practises it (and in case of Muslims it's not a sin at all), "Thou shalt not hurt Muslims" -- and specifically not with the truth -- has become the only commandment of importance.

All of them are, of course, not populist, only Thilo Sarrazin is that.

I have limited this entry for obvious reasons more or less to people I have covered before in this blog. It is impossible to even begin to give an impression of what is really going on, of the veritable witch hunt that is in full fly in Germany right now. A man who is, to all intents and purposes, a heavyweight and qualified by training and professional experience to speak expertly on many issues, is marginalized, ridiculed, dismissed by people who are not worth to clean his office lavatory. It is spooky, eerie, surreal. An entire people seems to have become mad. Utterly, stark, barking, clinically insane. An entire people hunts down a man who dares to speak the truth, a people who are put under pressure and threats by Muslims, threats which increase in severeness and frequency on a daily basis, a people that is bled white financially and emotionally by ever increasing strident demands and greed for power of a group of hostile aliens, and what is the worst: they are really and truly believing that they are being noble and doing the right thing.

And now, I think, the question is in order whether I have read Sarrazin's book myself. No I haven't. This is not a book review, but a report of the mood in Germany. Why didn't I read it? Simple! I tried to get one yesterday, the day after publication. When I looked at Amazon, it was sold out, all four editions. When I called the local bookshop, I got the same answer. All four editions means 180,000 copies. More to come in two weeks. I guess this, at least, is good news.
By The_Editrix At 09:50

You should read Bernard Levin's two essays on Alexander Solzhenitsyn, with their great central sentence: "Do not despair, Alexander Isayevitch. The people will hear."

The people will hear.

Too bad he brought genetic into his arguments and didn't just stick with statistics--or at least that's what the news says he did.

I'd blame most Arab- and Turk-German non-assimilation and violence on Islam--at least where it exceeds that of non-Muslim immigrants.

After 1400 years of Islam, one can no longer blame the "culture" or pre-Islamic culture when Islamdom compares badly with Christendom.

Why shouldn't the Armenian genocide be taught? Is this the local version of the movie line "You can't handle the truth".

Fabio: I will and I hope you are right.

Bruce: Why should he succumb to political correctness? After all, statistics and genetics are interrelated. But with Muslims, it's certainly a cultural problem and that is the core of Sarrazin's statement. All the brouhaha about his peripheral remarks about genes is a pretense to discredit him.

Beak: When will you finally get an education about Muslims?