The Uneasy Remembrance of Fritz Bauer

This hit the headlines here a couple of days ago and vanished into oblivion again with lightning speed. For the accounts in German language click HERE.

The records were among 27,000 pages of documents made public yesterday at the National Archives. They shed new light on the secret protection and support given to former Nazi officials and Nazi collaborators by U.S. intelligence agencies as fighting communism became the central aim of American foreign policy in the years after World War II.

''It was not U.S. policy to track Nazi war criminals once the Cold War began,'' said historian Timothy Naftali of the University of Virginia, a Cold War expert who has studied the new documents.

''The CIA based its decisions about using former SS men or unreconstructed Nazis solely on operational considerations. . . . Hiring these tainted individuals brought little other than operational problems and moral confusion to our government's intelligence community,'' he added.

The subject of postwar collaboration between U.S. intelligence and former Nazis that the government sought to use in the struggle against the Soviet Union has been documented, but historians said the previously inaccessible documents have enabled them to fill in many blanks in the historical narrative.

About 60,000 pages of CIA records had already been released since 1999, after a 1998 federal law opened up secret government files relating to war crimes by the German and Japanese governments during World War II.

Historians reviewing the records for the government published a 2004 book, ''U.S. Intelligence and the Nazis,'' based on 240,000 pages of FBI records, 419 CIA files and 3,000 pages of U.S. Army information. It detailed the Army's postwar relationship with former officers of the German Wehrmacht's intelligence service, which are available at the National Archives.

The materials released yesterday include operational documents detailing the activities of the CIA and its contacts abroad, historians and other officials said during a news conference at the National Archives.

''It's a rare release of operational files,'' said Allen Weinstein, head of the National Archives and chairman of the interagency working group overseeing the declassification of records about World War II crimes and criminals. ''The files are also more inclusive than any other CIA files made public before. . . . This time, the documents are nearly all without redactions, providing researchers and historians the clearest view yet of the postwar intelligence world.''

The release of the records stalled last year with the deadline for the interagency project approaching when the CIA balked at declassifying more detailed documents about the agency's postwar ties to Nazis. But the CIA caved in under pressure from Sen. Mike DeWine (R-Ohio), an author of the original legislation, and other prominent backers of that law. Congress passed a new law extending the life of the interagency panel by two years, to early 2007.

Some of the newly released documents show that between 1949 and 1955, the CIA organized ''stay-behind'' networks of German agents to provide intelligence from behind enemy lines, should the Soviet Union invade western Germany.
[...]
In a March 1958 memo to the CIA, the West German foreign intelligence services (BND) wrote that Eichmann, a top Gestapo official who helped orchestrate the mass murder of Jews, ''is reported to have lived in Argentina under the alias CLEMENS since 1952.'' The memo also mentioned a rumor that Eichmann lived in Jerusalem.

In fact, Eichmann was in Argentina and was using the name Ricardo Klement -- but apparently neither the CIA nor the West Germans acted on the information, Naftali said.

''Tragically, at the moment the CIA and the BND had this information the Israelis were temporarily giving up their search for Eichmann in Argentina because they could not figure out his alias,'' Naftali wrote in an analysis of the documents.
[...]
Robert Wolfe, a former federal archivist and an expert on captured German records, said the new CIA documents illustrate the ''sorry results'' of recruiting former Nazi intelligence personnel to U.S. efforts to keep the Soviet Union in check.

''The alleged intelligence those recruits peddled was mostly hearsay and gossip designed to tell their American interrogators what they wanted to hear, in the hope of escaping retribution for past crimes, or for mercenary gain, or for political agendas not necessarily compatible with American national interests,'' Wolfe said.

Yeah! Right! ''This time, the documents are nearly all without redactions, providing researchers and historians the clearest view yet of the postwar intelligence world.'' Such wonderful sensational news and stunning new insights!

However difficult it may be in the light of such hypocrisy, I will refrain from bringing up philosophical and academic questions like whether the means justify the ends. I will stick to facts.

Fact is, as already indicated in the above brief article, the former Nazi agents were of little, if any, value.

Fact is, the stance of the Western Allies during WWII did not suggest any marked interest in the faith of the Jews, which lessens the newsworthyness of the CIA/Nazi connection considerably.

It is common knowledge that the Allies refused to bomb the railway lines to the death camps in Poland, or the death camps themselves, for that, when they clearly knew what was going on there, for reasons like that it might kill people (that is NO joke!) or that it was too fussy or too dangerous to do so and don't get me started on the attitude of the British Palestine Mandate powers towards the refugees from the death camps during and following WWII.

Fact is, too, that the name of Fritz Bauer is conspiciuously absent AGAIN from those oh-so-sensational news. 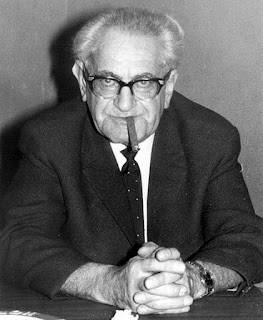 Who was Fritz Bauer? Fritz Bauer was the man who tipped off the Mossad about Eichmann's whereabouts. He, in turn, had gotten his information from a neighbour of ''Ricardo Klement'', Eichmann's alias. Information, nobody else had wanted.

Fritz Bauer, born 1903 in Stuttgart, was forced to leave Germany for political and ''racial'' reasons in 1936 after a stint in a concentration camp. He was a jurist and had been the youngest judge in Germany ever. In 1949, he returned to Germany. He was a German patriot and felt that it was his duty to return and participate in building up a democratic German society. Among other things, he was a pioneer in reforming penal law and the prison system. One of his goals was the ''resocialisation'' of young criminals and he relentlessly reminded the judicial administration of their social responsibilities.

He was one of the very few Jews who hold a higher rank in the post-war German legal system, namely as Generalstaatsanwalt (State Attorney General) in the state of Hessen. He was the man who pushed through the ''Auschwitz Prozess'', a futile attempt to allocate responsibility for the Holocaust, and planned a second one. He was found dead in the bathtub of his flat on July 1st, 1968. Evidence of tranquiliser had been found. The second ''Auschwitz Prozess''never took place. Google ''Fritz Bauer'' and ''murdered'' and you will find NOTHING. Sure, you will see ''murdered Jews of Europe'' and similar findings, but the cause of Fritz Bauer's death is a non-subject.

The Fritz Bauer Institute, a Frankfurt centre for Holocaust studies, was established in his memory, or so it is said, in 1995. The Bauer Institute's statement of purpose currently says: ''Remembering the Holocaust and confronting National Socialist crimes has been and is today perhaps more than ever before a problem for German society.'' Indeed! The longer the time span between us and the Holocaust, the more are we against it, while enabling those who might perform a second one in the Middle East.

Bauer's painfully short biography at the Institute's website does not even mention HOW he died, let alone does it offer a suggestion WHY he might have died. It may reveal, after all, some bit of history

So much about sensational new revelations and "confronting National Socialist crimes". So what else is new?
By The_Editrix At 17:14