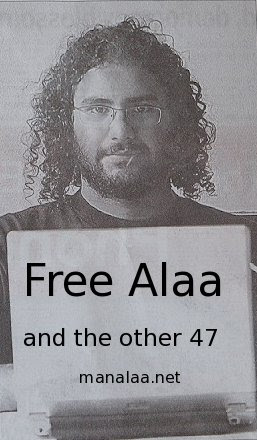 HAMSA (Hands Across the Mideast Support Alliance), has joined the supports for Alaa's case. They have created this page: http://www.hamsaweb.com/alaa , which includes a petition and a form where you can just fill-in your info and send the letter immediately.

Alaa Abd El-Fatah is one of Egypt's most prominent bloggers and free speech advocates. He and his wife Manal run the popular blog BitBucket, which collects posts from dozens of Egyptian blogs and which won a "Best of the Blogs" award in December from Reporters Without Borders.

On Saturday (May 7), Alaa was arrested with a group of activists during a peaceful demonstration outside a Cairo courthouse. The rally denounced disciplinary hearings for two reform judges and arrests of protestors at previous demonstrations. Alaa and a group of other demonstrators were cornered by Egyptian police, and security agents then apparently handpicked individual protestors for arrest.

Alaa seems to have been targeted because of his high profile: he helps organizes the protests and spread the information through the blog aggregator he runs. He is now being held in notorious Tora Prison — and his arrest seems designed to both shut down his blog aggregator and scare other Egyptian bloggers. But you can send a message to the Egyptian government through the petition below (you can edit the petition text), which will generate an email to political leaders who can secure Alaa's release.

This campaign has been signed 53 times.
Click here to see who's signed.