News from Europistan! The Tocqueville Connection doesn't even try to make an effort to be shy about the motivation of France's recent investment:

DOUAUMONT, France, June 25, 2006 (AFP) - President Jacques Chirac paid homage Sunday to the 600,000 Muslim soldiers from former colonies who fought for France in World War I, unveiling a memorial on the site of the bloody Verdun battlefield.

"The Verdun army was the army of the people, and all the people took part. It was France in all its diversity," he said, inaugurating a white-walled Moorish-style monument in their memory.

The memorial, topped by a cupola built at a cost of 500,000 euros (627,000 dollars), is seen as a belated recognition for Arab and other Muslim soldiers from Africa who fought German troops under France's flag.

It stands in the shadow of the Douaumont Ossuary, a building opened in 1932 that features a long stone cross along the 45-metre height of its imposing cloister.
[...]
That 10-month clash in 1916 resulted in a total 300,000 deaths on the French and German sides. An estimated 35,000 of them were Muslim soldiers fighting for France.

A monument to Jewish soldiers built in 1938 also stands nearby.

Previously, there existed only a small memorial pillar to African soldiers, as well as a Muslim section of the Douaumont war cemetery with 592 graves aligned to face Mecca.
[...]
Historically, the contribution of soldiers from France's colonial empire in both world wars has been overlooked.

But this year -- in the wake of riots on the outskirts of French cities last November largely fuelled by a sense of alienation among youths of immigrant North African families -- the tide has turned.
[...] 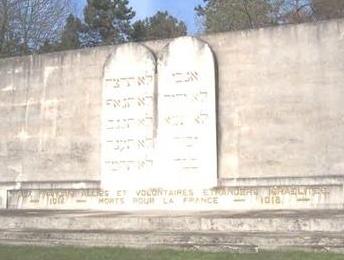 It has indeed! It took them 90 years to build such a memorial. In other words: If there hadn't been any riots, the spine- and gutless French would STILL don't give an aviating fornication for their dead Muslim soldiers.

The Grim Reaper will be delighted to have his prey neatly graded and with all that diversity drivel I wonder whether they'll upgrade the Jewish memorial now as well.

But then, Jews don't riot.