How Muslim Women Are let Down by Us

USA Today has got interesting and disturbing news: 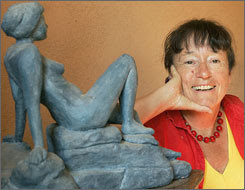 Photo: Michel Euler, AP
Dr. Emmanuelle Piet, who has been issuing five to six virginity certificates a year for three decades, poses at her home in Bondy, east of Paris.

SAINT-DENIS, France (AP) — Chastity can exact a painful price from young Muslim women, forced into lies or surgery to go to the marriage bed as virgins.
Hymen repair, fake virginity certificates and other deceptions, said to be commonplace in some Muslim countries, are practiced in France and elsewhere in Europe, where Muslim girls are more emancipated but still live under rigid codes of family honor.

Such ploys have saved many a young woman from scorn and worse. But they also clash with the more liberal social mores of France and Europe, where some decry it as an attack on human rights.

The procedures are legal but shrouded in silence — "something that passes through non-official channels," via friends or the Internet, said Dr. Nathan Wrobel. "There are circuits that lead women to me."

Wrobel is one of an unknown number of gynecologists in France who are willing to repair hymens... He was one of the few doctors willing to talk about it.

Wrobel says women come to him having convinced themselves that the procedure will somehow reverse the irreversible. "They tell me, 'I'll be a virgin again. You will make me a virgin,' which in reality is totally false .... It's a secret we share."

Other doctors issue false virginity certificates or offer such tricks as spilling a vial of blood on the sheets to fool families into believing the bride has passed their purity bar.
[...]
In today's France, with an estimated 5 million Muslims — the largest such population in western Europe — it's part of the larger question of how to deal with cultural clashes ranging from head scarves in schools to sexual segregation in swimming pools.

A 2005 government report addressing culture clashes in hospitals, and issued a year after Muslim head scarves were banned from classrooms, briefly mentions the virginity issue, asking doctors to refuse to issue false certificates.

Isabelle Levy, author of Religion in the Hospital, decries both certificates and hymen repair, saying deception "increases the moral suffering."
[...]
It is not known how many doctors in France or elsewhere in Europe help Muslim women to fake virginity. But in Germany, Turkish Muslim immigrants are increasingly seeking virginity certificates, said Serap Cileli, who survived a forced marriage and now helps victims.

German doctors who do hymen repair are easy to find, according to Sibylle Schreiber, who works with a women's rights group in Tuebingen, but it's "a taboo topic really only discussed best friend to best friend."
[...]
The price, $500, is steep for a young woman in a poor family and possibly unemployed. A German doctor advertising on the Internet charges $1,250.

Dr. Emmanuelle Piet, who heads the family planning clinics in an area north of Paris where many Muslims live, says she has been issuing a half-dozen virginity certificates a year for three decades.

But instead of hymen repair, she suggests less drastic measures, like spilling blood on the sheet on the wedding night.

It's deceptive but "it's one way to help the girls," said Piet, a veteran women's rights advocate. "They are stuck in things so terrible."
[...]

They are stuck "in things so terrible", Ms Women's Rights Advocate, because women like you give an aviating fornication about what happens to your poor sisters.

They are stuck "in things so terrible" because we in the West are either too scared witless or too self-hating or both to tell the men of that corrupt culture, which does all that to women to go and stuff themselves.

They are stuck "in things so terrible" because doctors, you included, make money from those women's tragic predicament.

And they are stuck "in things so terrible" because simpering dumb broads like you prefer to pose coquettishly in newspaper shots instead of simply helping where it mattered and speak up about the real causes for those "things terrible".

Not that the rest of the article is much better, mind you. Only a total and utter moron will describe the relative -- VERY relative -- differences between Muslim subcultures as "...elsewhere in Europe, where Muslim girls are more emancipated but still live under rigid codes of family honor."

To explore some aspects of the lifes of the "more emancipated" Muslim girls in Germany, I did a Google search in German on "Hymen Wiederherstellung". The first page already showed three hits for doctors who perform hymen repair, the results for "Hymen Plastik" yielded comparable results.

I guess it's asked too much to give up such a convenient quasi-sinecure, specifically if it even makes the holder look noble, and who gives a flying fornication for Muslim women, the poorest of the poor, anyway.


Click HERE ["The Whore Lived Like a German"], HERE [Germany's Lost Daughters] and HERE [Eyes Wide Shut] or HERE [blog entry: The wrong message to society has safely arrived already!] to read more about the "more emancipated" Muslim women in Germany.
By The_Editrix At 13:52