The Writing on the Lectern

It is not quite brand hot news that the plans for a mosque in one of the Berlin suburbs that used to belong to the former East Berlin, were met with outspoken protest. The newsmagazine SPIEGEL ONLINE reported on December 28 that

A citizens' group in Berlin turned out this week for a candlelight vigil to protest plans for a new mosque in their neighborhood. It will be the first to be built in the former East Berlin, where almost no Muslims live -- but no one can quite explain why it shouldn't be there.

Well, shouldn't the first step be to explain why it SHOULD be there?

Surprisingly, SPIEGEL ONLINE then went on contradicting themselves by delivering a host of good points exactly WHY the mosque shouldn't indeed be there:

They want to have a minaret with a muezzin who gives the call to prayer five times a day. Can you imagine? Five times a day over our rooftops.

And although the guy who said it was supposed to look like a moron, he didn't. He made a valid point. (Mind you, those SPIEGEL ONLINE schmocks are exactly of that lets-move-to-the-country-because-it's-so-quaint-and- somehow-earth-motherish ilk, who then sue the church because of the noise pollution of the bells and the farmers for crowing roosters -- and win the lawsuit.)

But there is more:

Their objections included traffic chaos and falling property prices, but the longest paragraph in the petition expresses concern about "an Islamic-Ahmadiyya parallel society, which would have the goal of overturning our liberal-democratic order."

But whatever. Today, I give you Detlef Dzembritzki.

Dzembritzki, kindergarden teacher become Sociologist, member of the German Bundestag for the Social Democrats and a paragon of everything that is considered good, noble and virtuous in Germany, plays maybe not a key- but a not totally negligible role in Germany's foreign, specifically Middle Eastern, politics, as his status as deputy-chairman of the parlamentarian committee for international economical cooperation and development with the key-topic "Politics instead of War" ("Politik statt Krieg") and Bosnia Commissary of the Bundestag, who is involved in Afghanistan- and Iraq-affairs as well (so the self-description at his website) is indicating.

Dzembritzki made the headlines last May when he met, together with two other German lawmakers and against all decisions of the Federal Government and the EU (Sweden had broken ranks to issue a visa to Palestinian Refugee Minister Atef Adwan enabling him to travel freely around the EU and enter Germany against the government's explicit wishes) a member of the terrorist gang Hamas.

The picture is copyrighted, so please click on the thumbnail to see it at its original location.

It was the same Dzembritzki, I guess he couldn't help it, who performed as one of the speakers at the ceremonial laying of the foundation stone on January 2 for the -- and now the story comes full circle -- controversial Ahmadiyya mosque mentioned above.

Yes, the writing on the lectern says: "Nobody is worth worshipping but Allah, Muhammad is Allah's messenger". 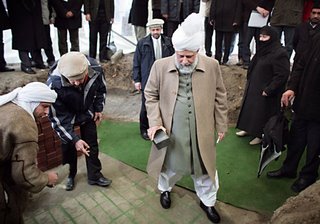 Ceremonial laying of the foundation stone for the Ahmadiyya mosque in Berlin on January 2. (dpa photo)

Last May, the old curmudgeon Henryk Broder asked whether it was admiration for a gangster in pinstripes or sheer and undiluted bumbledom that made Dzembritzki and the other lawmakers meeting the Hamas official. I'd say it is neither. Dzembritzki is just standing in the proud German tradition of the Germano-Arab brotherhood.

The new thing is just that nowadays one can side with the enemies of our culture and genocidal scum and STILL remain a Gutmensch.

Thanks to Gudrun Eussner for pointing me at the picture and correcting some factual mistakes!
By The_Editrix At 11:35

Uh, if this is an Ahmadiyya mosque, it won't do much for appeasing regular Muslims. They hate Ahmadiyyas worse than Jews and Christians, because they are considered heretics who believe in a prophet after Muhammad. Ahmadiyya mosques are bombed and torched from Iraq to Indonesia. Incidentally, they are among the few deviant Muslim groups who have shown a certain ability to live with non-Muslims (the Alevis are another, but they also barely count as Muslim at all) and have produced the only Muslim scientist ever to win a Nobel Prize, Dr. Abdus Salam.