The Post-Racial Age Has Arrived in Germany

...or: About people born on the right side. Twice.

The post-racial message of America's President Obama has finally arrived in Germany. How have we survived so long without it? 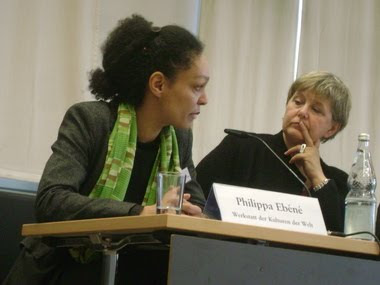 The director of the publicly funded "Workshop of Cultures" (Werkstatt der Kulturen), "theatermaker" and ethnologist Philippa Ebéné, decided Thursday to remove educational panels covering the Grand Mufti of Jerusalem, Haj Amin al-Husseini from a planned exhibiton at her premises to the disgust of a district mayor, the curator of the exhibit and the Berlin Jewish community.

The exhibit covers the immensely topical issue "The Third World during the Second World War" and three of 96 exhibit panels are dedicated to the REALLY topical issue of the mufti's collaboration with the Nazis who had a decisive influence on the Holocaust (we reported many times already). Ebéné stated that she refused to display the information on Husseini out of respect for joint Arab organisations. Her decision was supported by migration commissioner of the Berlin Senate, Günter Piening. In a neighbourhood (heavily dominated by Muslims) like Neukölln a "differentiated presentation" was paramount, Piening stated. 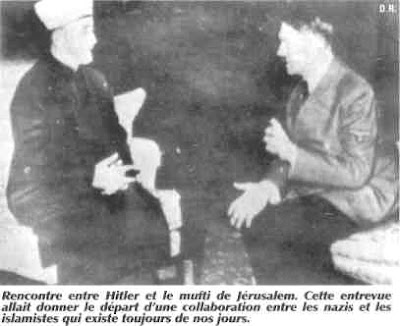 "Not differentiated enough". The mufti and his German buddies. 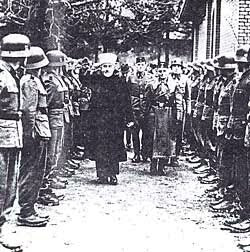 Maya Zehden, a spokeswoman for the Berlin Jewish community, termed Piening's statement "an appeasement attempt" to ignore the fact that "there was no official resistance from the Arabic world against the persecution of Jews" during the Shoah. She accused Piening of showing a false tolerance to German-Arabs in a heavily Muslim-influenced neighborhood.

In an e-mail to the JPost, Heinz Buschkowsky, the district mayor in Neukölln, wrote that it is a sign of "anticipatory obedience to avoid probable protests. I do not consider this position to be good", notabene pointing out that Piening's statement is a "repression of the facts dealing with anti-Semitism."

Meanwhile, Ebéné denied that there was an "agreement" with the local Muslim community to censor the exhibit. She termed media queries regarding an agreement as "Eurocentric." The Jeruslem Post was informed that the exhibit was intended as a "homage to soldiers from African" countries who fought against the Nazis. Indeed, a crucial aspect of WWII so far totally neglected.

When asked about her opposition to the inclusion of the mufti panels, she asked, "was there ever a commemoration event in Israel to honor the [African] soldiers?" In an Interview with Radio Berlin Brandenburg Ebéné, who has a German mother and a father from Cameroon and is thus, so to say by birth and per definitionem, on the right side, stated: I am not white. I have no reason to be afraid of Arabs", which is rather endearing for somebody who is allegedly heavy into informing the world about the African slave-trade.

My take on all this? This is so rock-solid, die-hard, intransigently and impregnally stupid and so full of the usual German "antifa", politically correct, "fight against the right", "multiculti"anti-West and racist crap, that it defies any serious comment, because that would lend her antics a credibility they don't possess. That Ebéné is first confusing Fascism and National-Socialism and then, when challenged, peddling her family's (the German side, that is) history of saving Jewish children to show that she is by birth DOUBLY on the right side, is only the icing on the cake.

Of course, the reaction of the public, the political classes and the media, or the question how Ebéné could end up in such a position at all, are a different matter.
By The_Editrix At 21:38

I just watched a documentary in how Himmler was quoted about how he much he admired the Muslim religion and it produced "ready made soldiers, willing to die and go to heaven" for the Waffen SS. Specifically he was referring to the Bosnian Muslims who were as good a trained fighters as was Leibstandarte and other German SS divisions. There was a lot of footage of these Muslims in Waffen SS uniforms, on their prayer rugs! I tvoed it and will try to watch and record those Himmler quotes in more detail. The point was, he did not not see that religion as incompatible with the ideals of National Socialism. It was astounding.

Maybe you also could put the recorded material on youtube for documentary purposes ..

I can try to do that, technically challenged as I am.

I strongly support Outcut's suggestion! Don't you have some talent in the family to help you?

'gator, it's really important that the world becomes aware of the Pal-Nazi connection. How often do I hear that 1) Israel came into being because of the Holocaust and 2) that the Pals had nothing to do with the Holocaust. Both is wrong. Israel would have come into being anyway, probably sooner than later and the young nation was able to start from an intact and functioning infrastructure the Yishuw, the Jewish community in pre-Israel Palestine (that was when the Jews were called Palestinians) had built up for roughly hundred years already. There was no love lost among the "Jeckes", as the German Jews were snidely called in pre-Israel Palestine, who had come only because they had little other choice and felt, like the good Germans they were, vastly superior to the children of the Ostjuden from Poland and Russia and even more so to the oriental Jews from North Africa. "Are you here by conviction or are you from Germany?"

Here are some entries covering this topic.

I'll see if I can get the boys to help when they get home some weekend from college. The documentary was on the Military Channel, not sure what copyrights may be in play. I will at least sit through it again and transcribe the quotations from Himmler and post them.

I believe the Mufti (who was Arafat's uncle) was instrumental in helping form the SS Bosnian Muslim Division.

Here are pictures of the SS Handzar division and the Mufti rubbing shoulders. There is a picture, too, of Arafat at the Mufti's funeral. At a Nazi site I once found the statement that the Mufti was blonde and had blue eyes and had been an "Aryan" really. I wonder how his relative Arafat could have managed then to look like a Stürmer Jew and even more so why no antisemite was ever put off by it. Sadly, it is not funny. The Mufti was a seriously evil man, as was Arafat. The word "evil" seems to have gone out of fashion. Maybe it sounds naive in our sophisticated times or it isn't "rational" enough. But that doesn't mean that evil (or Evil) doesn't exist anymore. In fact, even more so.

I think the worst that can happen to you if you commit a copyright infringement is that YouTube will take the video down.