The Man Who Puts Obama To Shame

Question: Is "post-racialism" possible?
Answer: It is ... if you are not black or a Muslim. 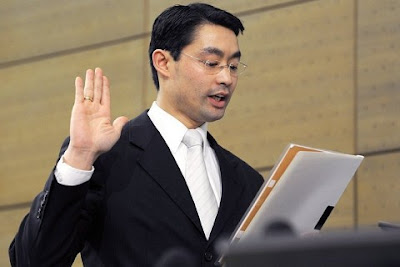 Rösler was born in Khanh Hoa, Vietnam, and came to Germany at the age of nine months as the adopted son of a couple that already had two biological daughters. He grew up in Hamburg and Lower Saxony. After training to become a combat medic in the Bundeswehr, Rösler was exempted to study medicine at the Hannover Medical School. Following this, he continued his education at the Bundeswehr hospital in Hamburg. He received his Doctor of Medicine degree in 2002, and left the military as a Stabsarzt, which equals the rank of an army captain, in 2003.

He is Catholic, which is decisively not the norm in strictly Protestant Lower Saxony, and a member of the General Conference of the Central Committee of German Catholics. 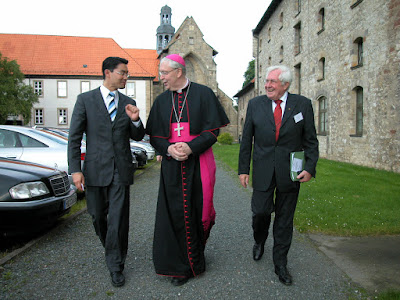 Rösler has been a member of the market-liberal FDP since 1992. He was secretary of the FDP in the state of Lower Saxony from 2000 until 2004. From 2001 until 2006 Rösler was a member in the regional assembly of Hanover (district), where he was also deputy chairman of the parliamentary group. In May 2005 he was elected an observer of the federal FDP executive committee. At the state party conference in March 2006, Rösler was elected chairman of the Lower Saxony FDP. In April 2008, he was confirmed in the office, receiving 95% of the votes.

In July 2007, he was elected to stand as his party’s main candidate in the Lower Saxony state election to be held in January 2008. On 18 February 2009, Rösler was appointed minister for economy, labour and transport as well as deputy prime minister of the state of Lower Saxony.

Now it was declared that he would succeed the painfully inept "Ulla" Schmidt as Federal Minister of Health in Angela Merkel's second Cabinet. 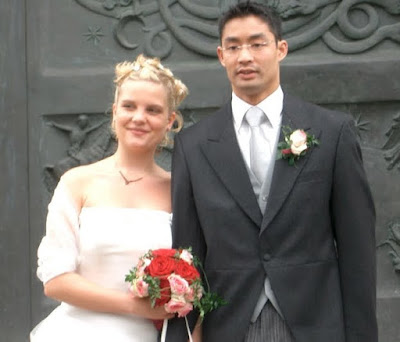 Rösler is married to Dr. Wiebke and since Oktober 28, 2008 they are the parents of the dizygotic twins Grietje Marie und Gesche Helene. "One looks rather East Frisian, like my wife, the other one resembles me", he told the glossy BUNTE.


---------- JUMP CUT ----------
Today, the trial of a man accused of killing an Egyptian woman in a German courtroom (we reported) opened in Dresden. Security is tight, about 200 police officers secure the court, the area is barred for traffic, the residents were asked to remove their cars from the streets and the accused sat behind bulletproof glass. Many attendants were wearing badges with the victim's face. "This trial is seen as having a higher than usual security risk," a police spokesman said and nobody laughed.

"He stabbed them out of pure hatred against non-Europeans and Muslims. He wanted to annihilate them," prosecutor Frank Heinrich told the court and nobody mentioned all the many peaceful Muslims for whom the security measures had to be taken because they want to annihilate US and have gone a long way towards that goal a darn sight more effectively already than the yob from Russia in the German courtroom in July in reverse.

Will it be enough? You must be joking!


---------- JUMP CUT ----------
January 31, 1997 the 42-year old Vietnamese Phan Van Toau's skull is broken by a German who smashes him on the concrete floor at Fredersdorf (Brandenburg) railway station. Three months later Phan dies in a clinic. The prosecutor at Frankfurt (Oder) opens the case against him on the grounds of xenophobia. During the trial, the perpetrator spouts racist slogans like "Fijis out of Germany". Still, the court does not follow the prosecutor and sees "no xenophobic motive" behind the deed. The defendant gets a sentence of nine and an half year for manslaughter.

In August 2008 a Vietnamese illegal cigarette dealer is stabbed to death by a German who wanted to play cops and robbers in Berlin-Marzahn. Witnesses confirm that the man had announced his deed and that he wanted "those Fijis" to go away. The head of the homicide squad saw no "hints that would suggest a racist crime". Accusations of manslaughter were dropped and the perpetrator confined to a mental institution.

It took me two minutes to find those cases through a Google search including the German search terms for "murder" and "Vietnamese". And neither in those two nor in any other of the other cases I found was a courthouse turned into a fort, no full-bodied declarations of "pure hatred against non-Europeans and Vietnamese" or "annihilation" were made, nobody wore badges with the dead men's faces and no politician went to the funerals carrying a white (or any) rose. In a word: nobody gave a damn.

Did the Vietnamese riot in the face of such REAL German coldheartedness, of such TRULY blatantly unjust sentences? Did they accuse the Germans collectively (if at all) of racism and hatred? Did they make demands? You must be joking! Instead, they went on with their clothes shops, their illegal cigarette dealings, their fruit and vegetable stalls, in a word, with their lifes*, just as Dr. Philipp Rösler did neither turn into an angry advocate for South Asians nor did he ever make his race an issue at all. He does not think that his success is justly deserved for past injustices of whites towards the non-white races, he does not speak for minorities, the disgruntled, the bitter, the jealous and the power-hungry, he does not offer himself as a redemption from the original sin of being white. He is just the right man for the job.


* This rather flip statement is supported by a 2007 study of the Ministry for Foreign Aid ("Economic Cooperation" as it is now politically correctly called). Most Vietnamese people, in West Germany more so than in the East, are well integrated. What is specifically interesting is that it was noted that they do little networking. They rather try to assimilate and to get on in life individually, based on their own merits.

In this context, the case of the rabbi who was stabbed by a friendly young man with a migration background in Frankfurt in September 2007 (we reported) deserves to be hauled from the blog bilges as well:


The 22-year-old admitted to stabbing the rabbi, prosecutors said in a statement. The man is being investigated on suspicion of attempted manslaughter and aggravated battery.

According to the rabbi, the assailant said "I’ll kill you, you Scheiß-Jude." [Expletives are hardly translatable -- Scheiß=shit, Jude=Jew].

Prosecutors said that the suspect -- whose name they did not release -- denies having either, any intention of killing the rabbi or any antisemitic motive.

Of course not. Nobody who rams a 7 1/2-centimetre blade into somebody's abdomen has intention of killing the recipient of this attention. That is true. As true as the suspect's statement that he felt threatened by and physically inferior to the middle-aged, obese rabbi and so reached for his knife. As true as he picked by mere chance a man to attack who was, by his outfit, easily identifiable as Jew. As Henryk M. Broder put it: "Here we have another case of self-defense, where the provocateur leaps aggressively into the provocatee's knife as an answer to a friendly "salam aleikum".

Jews didn't riot either in the face of such REAL German coldheartedness, of such TRULY blatantly unjust sentences. They didn't accuse the Germans collectively (if at all) of racism and hatred and they did not make demands.

Does anybody see a pattern here?
By The_Editrix At 14:56

Thank you for this post. I've heard a little too much wishful thinking the last few days. Thank you for confirming that there are still people who can see what's going on.

Well, what can I say? Europeans like to paint America as a "culture of violence" but from what I read here and in other sources, Europe seems to be doing a pretty good job in the area of racially motivated violence.

Most of our crime here is black on black, white on white, etc., and usually involves money or drugs deals gone wrong. Europe has fewer guns and tighter gun controls than the USA but that still doesn't seem to stop the brutal attacks.

Being a mono-racial society, violence of the quantity and quality you know at your end was indeed largely unknown here before we let in a large minority of Muslims. What drives me up the wall is the different reception of violence depending on who the victim and who the perpetrator is. A virtual cult about that woman has emerged while all the many victims of Muslim violence, mostly their own daughters, sisters and wifes, are all but forgotten, as are the victims of German perpetrators who were not Muslims, like the Vietnamese.