High on Booze and One's Own Importance

The pastoral head of the umbrella organisation of Germany's Protestant churches has admitted drunk-driving after having passed a red light and being caught with a blood alcohol level three times over the legal limit. This is not the first time the church leader has made headlines. Criticising Catholic teachings on homosexuality, the ordination of women and celibacy come to mind. The calling for the withdrawal of German troops from Afghanistan in a sermon on New Year's Day became well known or, if you like, notorious, as well. The representative of Germany's 25 million Protestants, who revels in the role of a moral authority, who has in that capacity criticised bankers for their greed during the financial crisis and condemned all forms of "excess", vocally declared that "Nothing is good in Afghanistan" and urged a speedy withdrawal of the German troops.

Now I will let you in on a secret about German psychology. You can bet your last penny that, if a German opposes a war -- ANY war -- he is really, deep down, opposing WWII, where the evil Americans attacked a trusting and innocent Germany to prevent it from completing their great patriotic deed.

"There is no such thing as a 'just war.' I cannot legitimize it from a Christian point of view," the bishop had stated, and: "There is nothing right in Afghanistan. All these strategies have just obscured the fact that soldiers are using their guns and even killing civilians."

Asked whether that applies to the war against Nazi Germany as well, the reply was affirmative: "They always say, if the Allies hadn’t attacked there wouldn’t have been freedom. But I say — why wasn’t there a strategy to avoid war? Why wasn’t the German opposition to Hitler strengthened? Why weren’t the rails leading to Auschwitz bombed?" And who gives an aviating fornication for the fact that is was the "strategy to avoid war" in the first place that enabled Hitler to turn into a threat to the entire free world.

Predictably, such history-relativising and responsibility-misaligning statements evoked a groundswell of support from the leftist German mainstream, public and media.

And now for the really interesting detail: The bishop is, interest- but not really amazingly, a bishoppette. 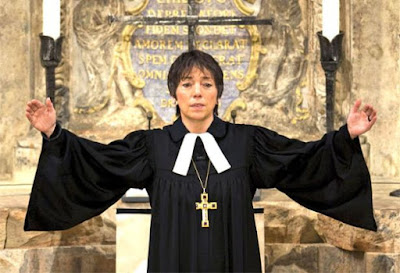 That women, known for granting the disgusting German tabloid BILD (no links to BILD from my blogs) interviews about her love life and her theology, never misses a snide remark about the Catholic church, like, for example "I'm not an infallibe papette", which proves either that she doesn't deserve her doctorate in theology or that she is an intellectually dishonest hack and oughtn't to head a Protestant kindergarden, let alone the Protestant church. Papal infallibility is clearly defined, strictly limited and has been executed twice, namely by Pope Pius IX in 1854 regarding the Immaculate Conception and by Pope Pius XII in 1950, defining the Assumption of Mary. But that theologian can safely assume that BILD readers don't know that anyway and whatever if it only makes such a great point against that evil old man in Rome whose throne even SHE (SHE SHE!) won't be -- horribile dictu -- able to reach. All this, mind you, goes by the label of "improving ecumenism".

We have, incidentally, reported on Margot Kässmann already when she was shameless enough to equate the radicalism, religious zeal and potential danger of Muslim and Christian converts and about the big slime spot she left in the Scripture when she twisted it to justify the breach of her marital vows. This bishopette, notabene, is divorced.

But as usual, not the problem is the problem, but how people react to it. The entire leftist public and media have their Attends in a knot to protect this paragon of leftist, i.e. rotten-to-the-core and depraved, values. Her organisation explicitly "covers her back" and the online fora are atwitter with statements saying that this is basically a good thing because it proves that she is, after all, human. And that when we all thought, just like she did herself, that she is godlike. Just imagine for a fraction of a moment what had happened, had a Catholic bishop made the same "honest mistake".

"Take heed to yourselves and to all the flock, in which the Holy Spirit has made you overseers, to care for the church of God which he obtained with the blood of his own Son. I know that after my departure fierce wolves will come in among you, not sparing the flock; and from among your own selves will arise men (women)speaking perverse things, to draw away the disciples after them." (Acts 20:26-30 RSV)

'gator, my favourite Scripture in this context is, without doubt, 1 Corinthians 14:33b-36.

The Protestant church in Germany didn't loose credibility when this woman did her drunk driving stunt, it had lost credibility already when they appointed her bishop, and later "head bishop". Everything else is just the inevitable outcome.

Your point is taken. Kassmann is not the problem, rather she is a symptom of a problem with the church.

Looked up a few things about Bishop Kassmann. If I had been a member of her flock, I would have been changing congregations a long time ago.

As she used to be the highest pastoral authority of all Protestant churches you'd have to become a Catholic then. ;-)

Look at this video from 0:22 to 0:55. It was broadcast within a comedy show yesterday night, but is is NOT satire, it is genuine. The opening title says: "One Could Have Known It" and then comes a clip of Kässmann delivering a sermon where she is clearly slurring her speech. And look at the stunned faces in the congregation. She says: "Witch hunt, for example, Inquisition, violate human dignity how long had racism had a Christian legitimation the dignity God grants everybody ...". The laughter and the huge belch are NOT part of the original performance. She speaks without inflection, no comma, no full stop and clearly slurs her words. I think that becomes obvious even for a non-German speaker.

The guestbook of the comedy show is full of deeply hurt reactions because Harald Schmidt (that's the comedian) has shown that woman as what she is.

Ba the way, Schmidt is a genius and everybody who says that we Germans have no sense of humour has no idea about what he is speaking. Among a lot of abysmal ones there is always one genius, always has been that way. Sorry for digressing!

Ooops... forgot to post the link to the video!