A Very Practical and Attractive Religion for Soldiers

The recent renaissance of the the proud German tradition of collaborating with murderous "Palestinian" Arab scum is deserving of further attention. The following is from a previous entry, namely Child Molesters Comparing Notes. It's too good (immodest I'm not!) to be doomed to future insignificance in the blog bilges, so I've taken and added a bit to it. 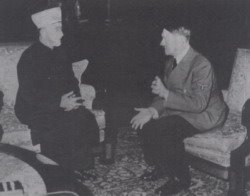 Hadj Amin el Husseini, with Brit assistance self-appointed and Brit-supported Grand Mufti of Jerusalem, mass murderer of Jews, on Hitler's payroll since 1937, accomplice of Hitler in the Holocaust, honoured guest in Berlin during WWII (all expenses, hookers included, paid), founder of the SS Handzar division, and post-war co-founder and President of the Arab League.

It is a widely shared consensus, that the existence of the state of Israel with her ethnic European population is the cause for the strife in the Middle East. So it may be a surprise to some that as early as 1933 Nazi political groups started to rise their ugly heads throughout the Arab world, for example Young Egypt, led by Muslim Brotherhood member Gamal Abdel Nasser, later Egyptian President. Young Egypt’s political slogan "One Folk, One Party, One Leader" is a direct translation from the German.

Who was the driving force behind this movement?

Contrary to the current politically correct version that the previously innocent and Jew-loving Arabs "learned" antisemitism from the Germans, there is sufficient proof even to justifiedly speculate whether to some extent the history of the European Jews would have taken not quite a disastrous course without Amin el Husseini, who later added "Hadj" to his name, and whose creepy shadow of death is still looming today.

He was born 1893 in Jerusalem under Ottoman rule. 1914-1917 he got his first taste of "jihad" and must have found it addictive. As an officer of the Ottoman Empire in Smyrna during the Armenian genocide, he actively participated in the slaughtering of one and a half million Christians by the Ottoman Army and it ought to be remembered that allegiance to the idea of the Ottoman Empire and a vision of Islamic world take-over was spine-chillingly echoed by Osama Bin Laden in his post-September 11th declaration.

But back to British Mandate Palestine, where Husseini is able to apply the lessons he had learned, lessons of genocide and the establishment of a Pan-Islamic empire, from which Jews and Christians are excluded. He stirs up riots in Palestine through the Twenties and Thirties, mainly, but not exclusively, targeted at Jews, including the massacre of the Hebron Jews on 23 and 24 August 1929.

The survivors are forced to flee Hebron, their property is seized by Arab residents and occupied until after the Six Day War 1967. The Hebron Jewish community was over 2,000 years old. This and other massacres may serve as both, proof for the fact that the Jewish-Arab relationships were, different from what some are fond of maintaining, less than well already before the foundation of the State of Israel and that, different from what others say, the Arabs did not learn genocidal antisemitism from the Nazis. But I digress.

Muslims who dare to protest against Hadj Amin's reign of terror are murdered as well, who, in 1931, becomes founder of the World Islamic Congress and starts to build his own strong political base.

1937 Hadj Amin el Husseini visits the German Consul in Jerusalem. He meets among others Adolf Eichmann (whose sense for "Aryan" company must have been a wee bit selective) to discuss "the Jewish question". From then on, Husseini will receive financial and military aid from Nazi Germany. He spends the war safe and sound in Germany, all expenses paid by the Foreign Office (Auswärtiges Amt). 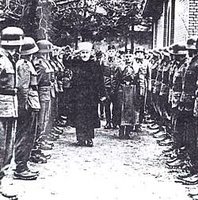 Active collaboration with top-ranking Nazis starts in 1941. Reportedly, Hitler would have been content with deporting the Jews to Palestine, which Husseini perceives as a threat to his powerbase and so he pushes successfully for the extermination of the European Jews. The same year, Husseini is made chief architect of the Nazi occupation in Bosnia. The Serbian-Cyrillic alphabet is banned, Orthodox Serbs forced to wear a blue, Jewish Serbs a yellow armband.

While in Bosnia, Amin Al-Husseini takes the title "Protector of Islam". 100,000 (One hundred thousand!) Bosnian Muslims join the Nazi ranks. They are seeking the approval of the Germans for establishing an autonomous protectorate for Bosnian Muslims.

Amin Al-Husseini approves the Pejani Plan calling for the extermination of the Serbian population, something that even Nazi Germany refuses to implement.

1942, Husseini intervenes personally with the Nazi High Command to refuse an offer by the Red Cross to exchange 10,000 Jewish children for German prisoners of war. The offer is refused and the children die in the gas chambers. 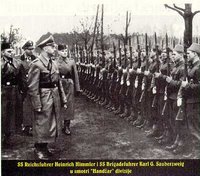 1943, he creates the Handzar Division of Muslim Soldiers in Bosnia, which is, with 26,000 soldiers, to become the largest division of the Third Reich military and participates actively in the genocide of the Serbians, Gipsies and Jews in Bosnia. The Muslim soldiers pledge allegiance to Nazi regime in an official statement drawn up by Heinrich Himmler. During the same year, Husseini is made "Prime Minister" of a Pan-Arab Government created by the Nazi regime. His "headquarters" are in Berlin. He plans to put up a concentration camp in Nablus to realise the "final solution" in Palestine as an extension of Hitler’s plan.

Husseini and Himmler grow on each other. At his insistence, the "Mufti" is even given a private tour of Auschwitz death camp by Himmler. 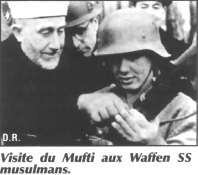 Heinrich Himmler, obviously another Nazi with rather selective "Aryan" tastes, informed Nazi chief propagandist Josef Goebbels: "[I] have nothing against Islam because it educates the men in this division for me and promises them heaven if they fight and are killed in action. A very practical and attractive religion for soldiers."

On August 6, 1943, Himmler writes the following letter to his man in the NDH, SS Gruppenführer und Generalleutnant der Polizei Konstantin Kammerhofer and to Artur Phleps, commander of the 5th SS Mountain Corps:

"All Moslem members of the Waffen SS and police are to be afforded the undeniable right of their religious demands never to touch pork, pork sausages nor to drink alcohol...I hold all commanders...and other SS officers, responsible for the most scrupulous and loyal respect for this privilege especially granted to the Muslims. They have answered the call of the Moslem chiefs and have come to us out of hatred for the common Jewish-Anglo-Bolshevik enemy and through respect and fidelity for he who they respect above all, the Fuehrer, Adolf Hitler... There will no longer be the least discussion about the special rights afforded to the Moslems in these circles.

It is Himmler, too, who establishes and funds the "Islamische Zentralinstitut" in Dresden, with Husseini as head. The purpose is to create a generation of Muslim leaders that would continue to use Islam as a carrier for Nazi ideology into the 21st century.

On March 1, 1944, Husseini addresses from Berlin the Muslim SS units: "Kill the Jews wherever you find them. This pleases God, history and religion. This saves your honour. God is with you."

1944, he becomes one of the founders of the Arab League. Its goal is to reinforce Pan-Islamic unity. Founding members are Egypt, Iraq, Jordan, Lebanon, Saudi Arabia, Syria and Yemen. Husseini is appointed in absentia President of Fourth Higher Committee.

1946, the British grant Husseini amnesty to weaken the Jewish presence in Mandate Palestine. He returns to Palestine.

1946, Hadj Amin is appointed leader of the Muslim Brotherhood in Jerusalem. Wahhabist Islam becomes the perfect carrier for Husseini’s policy of ethnic cleansing. He uses recently acquired Nazi methods to realise his vision of an Arab World free of Jews ("judenfrei"). Yugoslavia's request of extradition of Husseini from Egypt for War Crimes and Crimes against Humanity is refused by the Egyptian government. 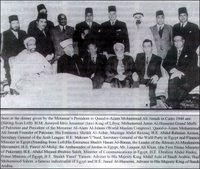 Egyptian(!)-born Yasser Arafat, later to become a "Palestinian" icon, meets Husseini at age 17 and starts then working for him. Hadj Amin el Husseini is allegedly a great-uncle of Arafat, whose real name is Mohammed Abder Rauf Arafat Al-Kudwa Al-Husseini. Arafat reportedly changed his name to disguise his nationality or his connection to Husseini or both, although why he should disguise family ties with a Pan-Arab icon like Hadj Amin I can't quite fathom. This, too, destroys the myth that the "Palestinian" fight against the "Israeli occupation is a political, secular struggle and not a part of global Islamic jihad.

Post-WWII, Husseini is directly involved in providing a safe haven to ex-Nazis in Arab countries and the main connection with Francois Genoud, Swiss banker of the Third Reich, who finances the ODESSA network with money stolen from European Jews. Genoud, visits Husseini several times in Beirut and sponsors Arab Nationalism with Nazi money. In Cairo and Tangiers, Genoud sets up an import-export company called Arabo-Afrika, as a cover for an anti-Jewish and later anti-Israeli propaganda organisation.

Genoud sets up, too, Swiss bank accounts for the North African liberation armies of Morocco, Tunisia and Algeria. Together with Syria, he sets up the Arab Commercial Bank in Geneva. 1962, he becomes director of the Arab People’s Bank in Algeria.

Putting up a picture of the Arab issue of "Mein Kampf" cost a German blogger recently his contract with his (German) ISP. Showing something like that is considered "hatespeak" by German law, while conveniently serving the purpose of keeping up a smokescreen preventing knowledge of German-Arab collaboration spreading too far.

Husseini dies in Syria in 1974 at the biblical age of 81. Life is rarely fair.

His legacy of a worldwide war of Islamic conquest, of terror and eliminatory hatred of Jews continues to this day. Yasser Arafat (on the right) pays hommage to his mentor at the latter's funeral.

For further reference regarding Middle Eastern history of this specific period go to:
Tell The Children The Truth, La bibliothèque proche-orientale or do a simple Google search, as the sources are too numerous to mention here.

For Balkan history go to:
Kosovo and the Holocaust: Falsifying History
ISLAM UNDER THE SWASTIKA: The Grand Mufti and the Nazi Protectorate of Bosnia-Hercegovina, 1941-1945
both by Carl Savich.

For further information on how easily and gladly Germans are turned into useful idiots for the cause of Islam and specifically Palestinian Arab terror read my previous blog entries Barking up the Wrong Tree as an Art Form, Cacophony and Idealists Working together for a Higher Order.
By The_Editrix At 16:38