The English tabloid The Sun is its usual belligerent self:

The sight of English flags proudly fluttering all around the country ahead of this month’s World Cup has got the petty jobsworths up in arms.
[...]
Today, in the spirit of our patron saint, The Sun calls for the slaying of the dragon of political correctness — and urges readers to fly the flag with pride.

Killjoys at cable giant NTL are among the latest party-poopers — ordering van drivers and subcontractors to tear down their flags in case they offend Muslims.

One shocked driver said: “If we’re seen with any flags on our vans we’ll be given a written warning.”

The company insisted: “We work in many multicultural areas and in different countries within Britain so we want to maintain a professional image and a sense of impartiality.” Among others to be hit by a flag ban are:

CONSTRUCTION WORKERS at Heathrow’s Terminal 5. Bosses claim St George crosses pose a health and safety risk — because the flags might get caught in the wind and fly on to a runway.

CABBIES in Cheltenham, Gloucs, who have been threatened with having licences revoked. The council claims flags are dangerous since they could fall off — a view now backed by Hampshire Police.

They want a blitz on drivers flying “unsafe” flags, claiming they could frighten horses and strike pedestrians.

FIREMEN in Barking, East London — barred from hoisting the flag at their station. The ruling was imposed despite Barking Mosque Secretary Ashfaq Siddique declaring: “We’re not offended — it’s a national flag!”

TESCO also got in on the act by banning its lorry drivers from flying the flag — although the supermarket giant later backtracked. Yesterday Massoud Shadjareh, leader of the Islamic Human Rights Commission, claimed English or British flags still conjure images of racism and the British National Party.

But The Sun says that banning ordinary English men and women from flying the flag only surrenders it to the moronic minority.

It is up to us all to clamp down on bigots who would use our national flag to excuse vile behaviour.

The town hall tyrants hell-bent on spoiling the World Cup party should hang their heads in shame. Most of the country’s Muslims are happy to get behind the flag — although there are some who never will.

Anjem Choudary, a former leader of the Islamic extremist group Al-Muhajiroun, claimed the St George flag symbolised a bloodthirsty past. He said: “The cross does represent Christianity and for Muslims it also represents a crusader history of occupation and murder.”

So what else is new? Muslims are playing the bad conscience card of the West again. The followers of Muhammad are not just engaged in a Jihad of death, destruction and conquest against "infidels", they are re-writing history to suit their agenda with the "infidels" meekly complying and they still suffer from post-traumatic stress syndrome because they did NOT do so some 900 years ago.

I don't know why it's England of all European countries who is showing such a particularly appaling lack of backbone. The only explanation that occurs to me is that they are probably suffering from a specifically nasty version of "White guilt" because of their long and extensive colonialist past.

The Sun has defiantly put up a collection of pictures illustrating the creative use of the St. George flag, of which I show the two I like best here: 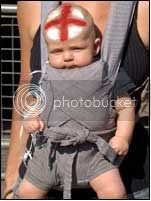 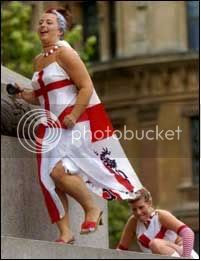 Thankworthily, The Sun also lets us know where the flag is coming from: 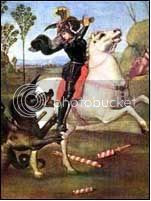 THE flag of St George
has been associated with
England for more than
800 years.

The red cross on a white
background first gained
prominence due to its
connection with St George,
a Roman soldier from the
4th Century who defended
the Christians against
persecution.

In the 12th Century the
English king Richard the
Lionheart brought back the
red cross from the Crusades
in the Middle East.

George’s association with a
dragon arises from a legend
that he killed a fire-
breathing monster which was
about to eat a maiden.

At the Council of Oxford in
1222, St George’s Day —
April 23 — was declared a
holiday and King Edward III
adopted the battle cry,
“St George for England!”

In the 16th Century the
St George’s Cross became
England’s sole saintly flag
and remained so even after
the union with Scotland.

The flag is also the rank
flag of an Admiral in the
Royal Navy, so merchant ships
cannot fly it.
[...]

Which explains, of course, the genesis of that deplorable Islamist traumatisation.

Sometimes, a tabloid shitrag has got it better than a politically correct shitrag for the guilt-ridden, oh-so-educated middle classes. My favourite fishwrap, the Al Guardian comes to mind, but there are, of course, others just as bad.

Meanwhile, The Sun is keeping us clued-up:

WHAT kind of paranoid fool orders a boy of two, sitting in his high-chair, to remove his England shirt lest it start a riot?

The bosses of the Wetherspoon’s pub chain, that’s who.

Little Charlie Elliott’s mum was told to turn his Three Lions top inside out to comply with a ban on footie shirts in their bars.

The manager couldn’t possibly turn a blind eye to Charlie, of course. He had his orders to follow.

As for his bosses, they still insist the happy little lad could have provoked other drinkers into verbally abusing him or his mum.

Which begs the question:

If there are nutters unhinged enough to attack a toddler for sporting an England shirt on the eve of the World Cup, why are Wetherspoon’s serving them lager?

As much as I despise the usage of cutey- and lower class-isms like "mum" or "footie", as much I have to admit that The Sun has got the essence right.