Germans love Jews -- dead, that is! 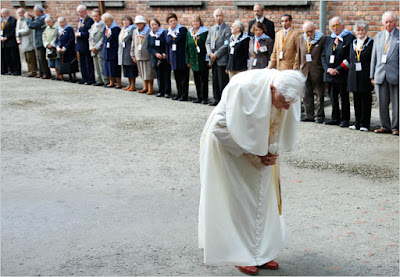 I am probably the last person fit to comment on theological matters, so I refrained so far from saying anything in view of the ongoing discussion about the ex-excommunication of that Holocaust-denying renegate bishop by Pope Benedict XVI. However, the discussion here in Germany has become so strident, hysterical and impertinent, that I'd like to comment, even if only briefly.

While the statement, that the Pope hadn't known about the Holocaust-denial of Williamson (the much-publicized interview was, in fact, given AFTER the excommunication was revoked, but his stance wasn't new) shows that the information system of the Vatican leaves a lot to be desired, it wasn't in any way discussed, let alone the not entirely outlandish conspiracy theory that the pope was conned.

The instead ensuing anti-Catholic hate orgy in the media violated, and is still violating, any common standard of journalistic ethics (an oxymoron if I've ever heard one). I can not tell how many times I had to listen to the tale of the "rehabilitation of the Holocaust denier", and even the very last theological troll was allowed to let loose his inner child. Hans Küng, who called for the "resignation" of the pope and who is particularly qualified to comment on Jewish topics as he considers, for once on the side of traditional Catholicism, "the international law-violating occupation of the Palestinian territories by Israel since 1967" a reason for the deterioration of the Jewish-Catholic relations, concluded in an interview with the "conservative" newspaper Die Welt: "The number of Christians who have left the Holy Land is speaking for itself", conveniently forgetting that it isn't Israeli-Jewish "occupation" that does that but Palestinian-Muslim atrocities, lauding, eerily befitting, Islam's "forceful Monotheism" in the same interview.

So what is the ex-excomunication really about? The four men may now attend again confession and receive absolution. They may receive communion and will not have to die without the solace of the sacraments of their church. That is all.

All, but very much for a Catholic.

But the public discussion is not really about that, it is about the authority of the pope and the Catholic church, who doggedly refuse to surrender their values to relativist secular ones. The world will stop despising Catholics once they've accepted the rules of political correctness as above the word of Jesus Christ, in other words, when they have ceased to be Catholics.

Germany is a secular country. Since the revision of paragraph § 166 StGB of the penal code in 1969, blasphemy has been abolished as a punishable crime. Holocaust denial, in contrast, has been elevated to a status where it is liable to prosecution, and the European Union, in the same spirit, refrained to include any reference to God in their constitution but made Holocaust denial a punishable crime as well.

Have superior ethics and morality been thus achieved?

Well, what can I say? There is certainly a difference between the importance that is given to the denial of the past Holocaust and the call for a future one.

If a Muslim-mob haunts the streets of our country chanting "Death to the Jews" it doesn't seem to be a big matter. If German politicians are rubbing shoulders with the Middle Eastern scum who are ready, willing and able to commit a second Holocaust, most of them deniers of the first one themselves, it's mostly a good thing. If a dialie dialogue with Islam is promoted, it's received with enthusiastic acclaim. Hasn't it, after all, been exceedingly fruitful in the past already?

Thus, the "Never Again" solemnly and hypocritically sworn at any Liberation-of-Auschwitz-Day, turns well-nigh into the precondition for the "Way to go" for the next one.
By The_Editrix At 08:49

That´s it! Thank you!

Thank YOU for finding me and making me aware of your blogs.